Fire Emblem: Archanea Saga (ファイアーエムブレム アカネイア戦記編 Faiā Emuburemu Akanea Senki Hen), also known as BS Fire Emblem, was a game comprised of four short standalone episodes that could be downloaded for the Satellaview add-on and streaming service for the Super Famicom (SNES). The last time they were broadcast was in 1999, and there is no longer any method of playing them in their original format. The episodes take place between the prologue chapters of Shadow Dragon and Chapter 1, Marth Embarks.

Because the game was broadcast on Satellaview only during scheduled times, there was also a time limit for completing an episode before the broadcast window closed. In addition, the story was told with the help of voice acting streamed over the Satellaview service.

The goal of the game was to complete each episode while scoring as many points as possible. Points were collected by completing actions such as defeating enemies, opening chests, and visiting villages.

Each episode featured one "lord" character who also functioned as the item storage, with the map resetting if the lord character was defeated in battle. The gameplay engine was the same used for Fire Emblem: Mystery of the Emblem. Characters from Mystery of the Emblem and Shadow Dragon and the Blade of Light made appearances (retaining their original growth rates), as well as some original characters.

The Dolhr army, led by Earth Dragon Medeus, has invaded the palace of Archanea. You take control of Princess Nyna, and her soldiers, as they try to flee from the palace. Blocking their way are Dolhr soldiers who you must defeat. The lord character of this chapter is Nyna, a bishop. She is accompanied by Boah, a bishop; Tomas, an archer; Midia, a paladin; and Dolph and Macellan, both Armor Knights.

Minerva discovers deserters of her Medonian army have been attacking villages near Aurelis. Although Hardin is her enemy, she decides to join forces with him to defeat the deserters. The lord characters of this chapter are Minerva, a dragon knight and Hardin, a cavalier. They are accompanied by Catria and Est, both Pegasus Knights; Wolf, a horseman; Roshea, a cavalier; and Frost, a bishop.

Many days have passed since the palace of Archanea was invaded. Rickard and Lena, along with Navarre and Castor, sneak into the palace to steal treasures to aid the poor, and perhaps themselves as well. The lord character of this chapter is Rickard. He is accompanied by Lena, a sister; Navarre, a mercenary; Castor, a hunter; Dice, a fighter; and Malice, a mercenary.

Two years have passed since Archanea fell. Nyna is currently under the protection of the Grustian Sable Knights, led by Camus. However she is endlessly pursued by Medeus' forces. Camus decides the best option is to head for Aurelis, in hope that Prince Hardin will offer her protection. The lord characters of this chapter are Nyna, a bishop, and Camus, a paladin. They are accompanied by Reiden and Belf, both cavaliers; and Robert, a horseman. 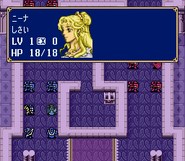 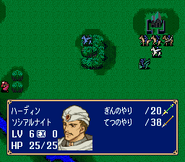 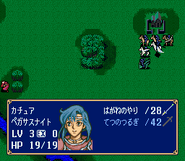