The game stars Marth, the hero of Fire Emblem: Shadow Dragon and the original Mystery of the Emblem as he fights in a conflict known as the "War of Heroes". He is accompanied by his trusted friend, an Altean knight and hero of the war completely forgotten by history, referred to as the "Hero of Shadow".

Players can customize the unit, who's named Kris by default, including their appearance, class and growth rates. New prologue and sidequest chapters heavily feature your custom character and also offer opportunities to recruit previously unobtainable characters.

Changes compared to Fire Emblem: Mystery of the Emblem

Changes compared to Fire Emblem: Mystery of the Emblem

Every Character, unlike in Shadow Dragon, can be recruited in the same playthrough without having to kill other units. As such, it is possible to have every character recruited and alive on one playthrough.

Unlike the original, this skips Book 1.

Marth with the default Male and Female versions of Kris.

Emperor Hardin stirs war and unrest throughout the land. 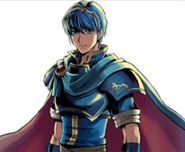 Prince Marth stating his gratitude and offering to rightfully credit the victory to Kris.