Start a Wiki
watch 00:30
Fire Emblem: Path of Radiance - Trailer
Do you like this video?

Path of Radiance averaged 86% on Game Rankings, which makes it the seventh highest rated Fire Emblem game. In Super Smash Bros. Brawl, the game's main character, Ike appeared as a playable character. Sothe, Elincia, The Black Knight, and Ashnard appeared as trophies. It is also represented in the form of music tracks and stickers.

Path of Radiance is set on the fictional continent of Tellius. Tellius is divided into nations that are either governed by beorc or laguz. There are seven nations:

Fire Emblem: Path of Radiance is set on the fictional continent of Tellius. The storyline is all-new and unrelated to any other Fire Emblem titles. The protagonist, Ike, the son of Greil, begins the game as the newest member of his father's mercenary company, the Greil Mercenaries. The company operates within the borders of Crimea, a nation of humans (referred to as "beorc") that shares its southern border with Gallia, a nation of Beast laguz, or humanoids capable of transforming into animals. A few chapters into the game, a neighboring beorc nation, Daein, invades Crimea. Soon after, Ike comes across an unconscious woman in a forest that turns out to be the Crimean princess, Elincia Ridell Crimea. Faced with the ruthless Daein assault, Greil leads the mercenaries out of Crimea and towards Gallia, but is mortally wounded by a Daein general known only as the Black Knight. These events mark the beginning of a long journey that will take Ike, Elincia, and the mercenaries across the continent and back in an effort to defeat Daein and restore Crimea's royalty to the throne.

Over the course of the game, Ike and his companions must overcome long-held racial tensions between the beorc and laguz in order to form an alliance against their true enemy, Ashnard, King of Daein. In particular, Ike manages to reestablish relations between the beorc nation of Begnion and the few remaining members of the heron laguz clan, which was annihilated in an act of genocide known as the Serenes Massacre. With this accomplishment, Ike is given command of a patchwork army that he leads into Daein and finally back to Crimea, where he confronts the Black Knight and ultimately King Ashnard himself.

In the fictional world of Tellius, the Fire Emblem takes the form of a simple bronze medallion also known as Lehran's Medallion. It holds the soul of an evil god whose energies disrupt the level of chaotic energy in a person. For example, when Greil touched the medallion, it caused him to go berserk and kill everyone in sight, including his wife, Elena. It was only when she took the medallion from his hand in her final moments that Greil regained his sanity. Only a person with a high level of balance is capable of holding the medallion without losing his or her mind. Ike's mother, Elena, and his younger sister, Mist, are two such people.

The medallion once belonged to the Heron clans that dwelt in the Serenes Forest within Begnion. They were charged with protecting the medallion so that the evil god would not be released. However, the Serenes Massacre forced Lillia, a member of the Heron royal family, to flee with the medallion, only to be captured by Ashnard (or his subordinates). Lillia was ordered to free the dark god, but she could not. She befriended Elena and gave the medallion to her. Mist eventually inherited it from her mother.

In the final chapter of the "Difficult" difficulty (and "Maniac" in the Japanese version), Ashnard uses the medallion after his initial defeat to gain godlike power. Despite this strength growth, he is still defeated by Ike and the party.

The game retains the fundamental gameplay mechanics of the Fire Emblem series, such as the weapon triangle and grid-based battlefields. However, there are some changes to the gameplay, such as the way in which the group prepares and units support each other, as well as a change to the magic system.

Path of Radiance introduces the laguz changelings—humanoid creatures that transform into powerful animals when their transformation gauge is full. The bar within the transformation gauge increases each turn; the laguz spend roughly an equal amount of time in each form, though the humanoid form can be completely bypassed if the laguz is equipped with either a Demi Band or a Laguz Band—the former of which decreases the user's battle statistics. When in animal form, laguz use the natural weapons of their species—claws for beasts, beaks for birds, and breath attacks for dragons. The natural weapons of a laguz will never break with use, unlike normal beorc weaponry, but laguz do not use beorc weapons and are thus unable to attack when not in animal form. There are three species of laguz—beasts, birds, and dragons. These species are further divided into three classes each, although not all of them are playable. Beast laguz are divided into Cats, Tigers, and lions; birds into ravens, hawks, and Herons; and dragons are divided into red, white, and black dragons. Each laguz species has an elemental weakness: fire for beasts, wind for birds, and thunder for dragons. Birds can fly in either form, but also have the weakness to bows associated with flying units.

This installment of the Fire Emblem series—like the previous two released in the West—allows the player to change a unit's class once he or she reaches a certain level. However, unlike in the Game Boy Advance games (which used specially designated items for promotion) a unit automatically promotes upon reaching level twenty-one. Players can also use the Master Seal item to immediately promote any unit at any point between levels ten to twenty. Laguz characters cannot promote.

Path of Radiance introduces some new classes while omitting some that were present in earlier Fire Emblem installments. There have also been changes to which weapons some classes can wield. Ex: Paladins have the option of using bows, where in previous games they could not.

The skill system, which was introduced in Fire Emblem: Genealogy of the Holy War, has different mechanics in this game. Each character has a capacity gauge that allows for mastery of skills. By using a skill scroll, the character learns the corresponding skill and a certain amount of slots are taken up in the capacity gauge, usually determined by how useful the skill is. The space of the capacity gauge varies between classes and characters. Any unit can learn any skill, although there are exceptions. Skills vary in how useful they are and what they do. Most give the unit an advantage in battle; Ike's Aether, for example, allows Ike to deal damage as if his opponent has half their real defense, while healing him for half the damage he would deal. However, if you unassign a skill from someone, that skill disappears forever.

Bonus Experience was introduced in this game. At the end of every chapter, Bonus Experience is awarded based on certain factors such as number of enemies remaining and turns taken to complete the chapter. It can be distributed to units at the Base Screen. Just as in the previous Fire Emblem installments, one hundred Experience Points are required to level up.

Another unique feature to Path of Radiance is Fixed mode, which is an alternative method for unit growth that is available after completing the game once. Random mode—the method used in all other titles in the series, as well as in the first playthrough of Path of Radiance—gives units a set percentage chance to increase a given stat upon level up. This chance is termed a "growth rate." Due to the "chance nature" of this system, a unit that levels up may gain many stat increases or none at all. In Fixed mode, units instead earn experience towards a stat increase as they earn standard experience. This "stat experience" is kept per stat, and if enough has been accumulated, that stat will increase the next time the unit gains a level and "stat experience" will return to zero; otherwise, it will carry over to the next level. Units earn stat experience based on their individual growth rates, which can be modified by the items a unit has equipped and the class of the enemy that it is attacking.

The weapon forging system, introduced in this game, allows players to create improved versions of some of the weapons available in shops. Players can forge one weapon during every visit to the Base screen. To forge a weapon, the player first chooses a base weapon to modify. Choices of base weapon are initially limited, but more options become available as the player progresses through the game. The player can then increase or decrease several statistics of the weapon, such as strength and weight. The further away from the statistics of the base weapon, the higher the cost; making no changes to the base statistics results in the same price as the base weapon. After statistics are adjusted, the player can choose a new color for the weapon and give it a unique name. These features have no effect on price.

The difficulty modes are changed: Non-Japanese copies have easy, normal and hard, whereas the JPN version has normal, hard, and maniac. In the localized versions, the Swordmaster, Berserker, and Sniper unit classes receive a 15% boost to their critical rate (the chance to triple the damage of an attack), similar to those present in Fire Emblem: The Blazing Blade and Fire Emblem: The Sacred Stones. Path of Radiance was the first Fire Emblem game to feature voice acting. In the Japanese version, there was voiced narration for all of the overworld map scenes and the ending cinema scenes. However, the narration was mostly omitted in the English version, leaving only the ending cinema narration and the cutscenes.

Link Connection with the GBAEdit

For a list of music from the game see: List of Music in Fire Emblem: Path of Radiance

Path of Radiance is the first Fire Emblem title to feature three-dimensional graphics on the battlefield, replacing two-dimensional sprite animations and landscapes with fully rendered 3-D models. It is also the first game in the series to make use of full motion video to present cinematic sequences at key points in the game. The FMV sequences were animated by Digital Frontier, which would later create the FMV sequences for its sequel.12

The Fire Emblem series' veteran music composer, Yuka Tsujiyoko, was actively involved in providing the musical score. Path of Radiance is the first Fire Emblem game to feature an in-game theme song with vocals, "Life Returns," which is sung in the fictional language of the heron tribe. (The Binding Blade previously used lyrics for the main theme in the game's retail soundtrack)

Despite being one of the three worst sellers in Japan (The other two being Fire Emblem: Radiant Dawn and Fire Emblem: Thracia 776), the game received mostly positive reviews after its release. Game Rankings, a website that provides video games with percentile scores based on the score average collected from a variety of review sources, rated the game with an 86 percent, giving it a higher average ranking than Fire Emblem: The Sacred Stones.

The game was praised for its deep story, excellent cinema cut-scenes, and pseudo-orchestrated music. However, it was criticized for outdated in-game graphics and extended periods of dialogue, as well as the lack of innovation in gameplay and presentation. Eurogamer cited the gameplay as "single-minded", stating that some gameplay elements lack complexity compared to games of a similar genre such as Final Fantasy Tactics. Furthermore, they proceed to mention the occasional burden of ensuring unit's safety as a result of permanent death, and the frustration when losing a unit. Despite this, the game was praised for retaining the charm that made the previous installments popular. 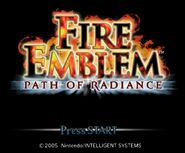 A prerelease version of the logo.

Logo of Path of Radiance

The Game Over screen