[view]
Fire Emblem: Shadow Dragon is the eleventh installment of the Fire Emblem series and the first to feature online play. Announced in October 2007, the game is for the Nintendo DS and is a remake of the first Fire Emblem game, Fire Emblem: Shadow Dragon and the Blade of Light. The game also utilizes the dual screen on the Nintendo DS and its online capabilities. The game features Marth as the main character of the game. The story centers on Marth as he embarks on a quest to win back the kingdom of Altea and rescue his kidnapped sister, Elice. Characters that were not present in the original version, such as Frey, have been introduced in this version. Fire Emblem: Shadow Dragon was released August 7, 2008 in Japan and in Europe on December 5, 2008. The North American version was released later, on February 16, 2009. Thus, the English localization of the game first occurred for the European market, using some name translations that the North American version did not end up using.

Long ago, the continent of Archanea was invaded by the Dolhr Empire, led by the Shadow Dragon, Medeus, and the people lived in fear and despair. However, a miracle occurred. Anri, a youth from Altea, killed Medeus using Falchion, the blade of light. The Kingdom of Archanea was restored and the world entered an age of peace. But 100 years later... Medeus was resurrected. He joined forces with "Dark Pontifex" Gharnef, who shared his ambitions of ruling the world, and launched an attack on Archanea. Archanea was defeated by Grust's General Camus, and, aside from Princess Nyna, the royal family was wiped out. Cornelius, the king of Altea and successor of the heroic Anri, left to battle Medeus, with the Falchion in hand. Meanwhile, Cornelius's son and the prince of Altea, Marth, awaits his father's return as he passes his days with his combat training. He was attacked by the forces of Gra but fled to Talys. Years later, he set out to reclaim Altea.

Fire Emblem: Shadow Dragon is a tactical role-playing game with turn-based battles. Some of the gameplay mechanics of the Fire Emblem series, such as the weapon triangle, were not present in the original Shadow Dragon & the Blade of Light, but have been included in this remake. The game features over 20 character classes, including armored Knights, airborne Pegasus Knights and Curates. Players can also directly swap a character's class using the "Class Swap" feature, for example; a Knight could switch to a Mercenary. Although, there are limitations on how many of one particular class you can have at the same time. Special classes like Lord or Thief cannot use "Class Swap".

In the middle of a battle, players can save their game by moving a unit onto a special "Save Point", which is found on the map and is usually located before a boss fight or a similarly dangerous event. Each Save Point can be used to save the game and only once, although players can load from created saves as many times as they want, as long as the save is not overwritten. Players can also choose to make a similar permanent save upon completing a chapter. The Suspend feature from previous games is also present.

For the first time in the series, players can battle each other online via the Nintendo Wi-Fi Connection. These battles employ teams of up to five characters from the single-player campaign. Combat takes place multiplayer-exclusive battle maps, which allow free movement as opposed to the Link Arena in prior games (there is only one multiplayer map in the Japanese version). Only two players can do battle at a time. Fog of War can be toggled on or off, and a time and turn limit are also active. Victory is determined by either defeating the opposing army or securing the central castle's flag before the turns are over. Victors are awarded a "Card" for their efforts. One of these cards can be used on a party to give it special effects, and use of these cards can be toggled on or off. The Wi-Fi connection is also used to access an online shop, where players can purchase items using currency obtained in the main campaign. In addition to loaning units to other players, to assist with the single-player campaign. 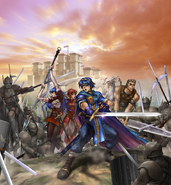