In the Thracian peninsula in southeastern Jugdral, the Manster District was subjugated following the deaths of Prince Quan of Leonster and his wife Ethlyn in the Yied Massacre. However, shortly after capturing it, Thracia was defeated by Grannvale and forced to cede control to Friege, becoming a servant state to the empire. Leif, the deposed heir to the Republic of Manster, who was rescued from an attack by the forces of Thracia by Finn, a friend of Seliph's father Sigurd, starts a revolution against the Empire's occupation of the Manster District.

Spending most of his life on the run, Leif eventually finds shelter in the village of Fiana. One day, the villager's protectors are routing bandits when the new Duke of Manster Raydrik attacks the village in search of Leif, kidnapping Leif's friends Nanna and Mareeta. Devastated by the town's destruction and his friends' abductions, Leif decides to face the forces of Thracia and retake Manster. Aided by Finn and a growing band of rebels, he rescues both Nanna and the enemy-controlled Mareeta, and defeating Raydrik's forces as they retake Manster and liberate northern Thracia. Leif's forces finally face Raydrik in battle, but upon his defeat he is transformed into an undead monster called Deadlord Mus. Leif destroys Mus, and cements his forces defending Manster and northern Thracia from the Grannvale army.

Fire Emblem: Thracia 776 was released in Japan exclusively, and no officially localized versions of the game exist.

In 2008, Shaya released an unofficial fan translation, but the project was discontinued before it was fully completed. The last known version of the patch has the main script fully translated by FireLizard, but it has many glitches due to its unfinished nature.

Then, in 2018, Cirosan began working on a brand new translation, called "Project Exile". This patch features an entirely new script, and also includes a full menu translation, making the game translated in its entirety. The patch was released on May 31st, 2019, and is still receiving minor updates and support as of June 2019. 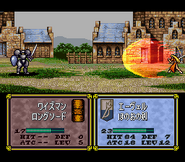 Gameplay.
Add a photo to this gallery