The continent that serves as the setting of Fire Emblem Fates is unnamed. It extends to lands far to the north and west of the territories explored in Birthright, Conquest, and Revelation, and is home to many nations and tribes. In the Before Awakening DLC mission, Chrom reveals that both Hoshido and Nohr are well-known and considered mythical kingdoms to Ylisse and its inhabitants.

Cheve is a country south of Nohr, a short distance northwest of the country of Nestra. It is famed for its highly-skilled knights, and its people uniquely hold the belief that their dead become new stars in the sky.

The Kingdom of Hoshido is a nation on the eastern half of the continent founded by the followers of the Dawn Dragon. It is ruled by a king descended from those humans who were gifted the Dawn Dragon's blood, and thus the ability to wield the Dragon's Vein, and its capital is Castle Shirasagi. Hoshido benefits from a mild climate and plentiful food, causing it to be the subject of aggression from its rival, Nohr.

Igasato is a nation with close ties to Hoshido. It is ruled by a clan that passes down the name Saizo from leader to leader. The ninjas of Igasato usually serve in the Hoshidan army and act as bodyguards for the royal family.

The Kingdom of Izumo is a nation on Hoshido's southern border. It is ruled by an archduke who claims to be descended from the gods, and has the power to commune with them and read the fortunes of individuals. The Izumites are a peaceful people, and consequently their country is known for having the best healers and only a small military.

Kohga is a former nation that was violently invaded and annexed by its neighbor, Mokushu. It is said to have been a pleasant land with green mountains and many renowned ninja dojos before the Mokushujin razed its towns and massacred its people.

The Kingdom of Mokushu is a nation south of Hoshido and Izumo. It is ruled by a daimyo. The Mokushujin are known for their skilled ninjas, and their current daimyo harbors ambitions of making his country even more powerful than Hoshido. Some years earlier, Mokushu forcibly annexed the neighboring country of Kohga.

The Kingdom of Nestra is a nation on Nohr's southern border. The Nestrians have a reputation for being great singers and dancers, and their best performers give shows at the famed Opera House of the resort city of Cyrkensia.

The Kingdom of Nohr is a nation on the western half of the continent founded by the followers of the Dusk Dragon. It is ruled by a king descended from those humans who were gifted the Dusk Dragon's blood, and thus the ability to wield the Dragon's Vein, and its capital is Windmire. Nohr suffers from a cold climate and food shortages, causing it to envy its more fertile rival, Hoshido.

Notre Sagesse is an island nation located in the southern sea between Nohr and Hoshido. Called "the land of philosophers", it is the home of the Rainbow Sage, who is believed to offer a gift of divine power to those who can survive his trials.

The Kingdom of Valla is a hidden nation that can only be reached through the Bottomless Canyon that divides Hoshido and Nohr Along with a small lake in Conquest. It was ruled by a king before the dragon Anankos overthrew the rightful ruler and named himself god-king of Valla. Due to a powerful curse crafted by Anankos, no one may speak of Valla outside of its borders without immediately dying, and its soldiers appear to others as nearly-invisible apparitions wreathed in purple flames.

There are five known tribes in the Fates continent: the Flame Tribe, the Ice Tribe, the Kitsune, the Wind Tribe, and the Wolfskin.

The Flame Tribe inhabits a region outside of Hoshido and Nohr. Its people worship the God of the Flame, and maintain a policy of strict isolation to protect the sacred fire made to pay tribute to him.

The Ice Tribe inhabits one of the coldest regions in Nohr, in the midst of a southern mountain range. The tribe was once autonomous despite existing within Nohrian territory, but in recent years they have had much of that independence stripped away from them and have begun to resent Nohr's increasingly oppressive rule.

The Kitsune are a race of shapeshifting fox-like humanoids who inhabit secluded hamlet in the southern Hoshidan mountains. Few outsiders know of their existence.

The Wind Tribe inhabits an arid, mountainous region south of the Hoshidan heartland. The tribe is autonomous and friendly to Hoshido.

The Wolfskin are a race of shapeshifting wolf-like humanoids who inhabit Mount Garou in southern Nohr. Outsiders usually avoid their village, both because of the difficulty of traversing the mountain and the Wolfskin's reputation for hostility. 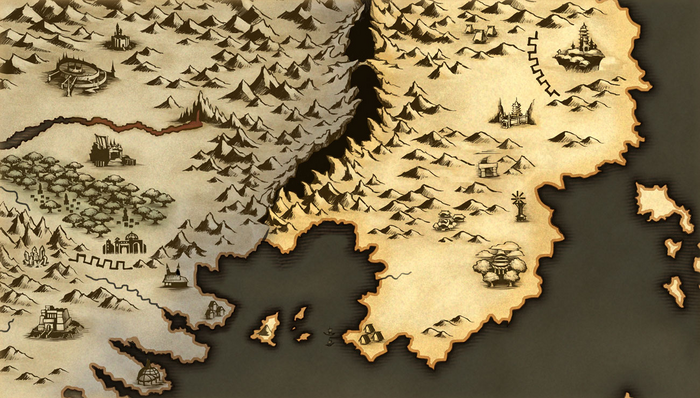