A Fire Emblem mobile app was announced on April 27, 2016 as a part of Nintendo's effort to bring their content to the mobile phone market. Initially announced to release in the fall of 2016, it was later pushed back to an unspecified date within the March 2017 timeframe before its official release date of Febuary 2, 2017 was unveiled.

The game is one of the first titles developed internally by Nintendo for mobile phones. It will not be a traditional Fire Emblem experience, but one tailored more toward the mobile market to help drive broader interest in the franchise and the core games on Nintendo platforms. It is also one of the first mobile apps, after the social app Miitomo and Super Mario Run, to make use of the universal Nintendo Account system created in collaboration with Nintendo's corporate partner DeNA.

The game was officially unveiled during a Fire Emblem-themed Nintendo Direct on January 18, 2017. During the Direct, the game's final title Fire Emblem Heroes was revealed, and its story and gameplay were both introduced. It was also revealed that the game is a free-to-play mobile app with microtransactions based on a "gacha" collection structure. All characters that appear in the game will receive new art and new voiced dialogue.

The game follows two protagonists, the royal siblings of the Kingdom of Askr, Prince Alfonse and Princess Sharena, as well as gathered heroes from other worlds. Together, they plan to fight against the opposing Emblian Empire and their leader, Princess Veronica.

Fire Emblem Heroes is a strategy game requiring a mixture of tactics and unit training.

Heroes revolves around using various Fire Emblem characters from numerous games, three of which are exclusive to Heroes. Heroes may be summoned either via completing special missions or Summoning them using Orbs. When Summoning, the player expends 5 Orbs for a board containing 5 Orbs. Each orb will have a random color assigned to it upon starting the board, with the color determining what equipment type the summoned Hero will have. After the player selects an orb, a Hero is summoned, with the rarity of the hero being fixed to a percentile chance, hence the player is not guaranteed a 5 Star Hero every board time. The player is then given the option to summon another Hero on the same board for a reduced cost of 4 Orbs. The player may summon up to three Heroes on the same board for 4 Orbs, where the fifth and final orb on the board will cost 3, making a complete board purchase cost 20 Orbs. Once summoned, that Hero becomes a permanent member of the player's army and can be trained to become stronger, fused with an ally for bonus stats and SP points, or dismissed for an amount of Feathers.

Orbs are a form of currency in the game which can be used for a variety of purposes including replenishing Stamina and Dueling Swords, Purchasing expanded barracks, or summoning new Heroes. Players are given Orbs the first time they complete any story map on any difficulty, gifted through missions, and through event gifts. Players may also buy Orbs through in-app purchases which a minimum of 3 Orbs cost roughly 2 USD. Orb bundles go up to 75 USD and offer more bonus orbs the more expensive the bundle is.

Heroes are unique and have different properties including different unit types, stats, preferred weapon, and bonus skills/abilities. Summoned heroes also has a rarity assigned; higher rarities allow stronger starting stats, better growth rates, and more available skills. Characters may be trained up to Level 40, upon which they reach a Level Cap and cannot obtain any more levels. Any 1 Star to 4 Star Hero can perform an Unlock Potential, raising their Rarity by 1, but also resetting their Level to 1 and reseting their stats to its original base total. Skill Points (SP) are the only stat that does not reset when Unlocking Potential. Unlock Potential costs Badges and Feathers to perform. 2 Star to 4 Star Unlock costs normal badges while 5 Star Unlock requires Great Badges and a substantial amount of Feathers. Heroes who are 5 Stars cannot perform any more Unlock Potentials. They can, however, fuse with any copies of themselves through Merge Allies. Merging any copy of a Hero will grant them additional Skill Points, with higher skill points the rarer the card is. However, if the merging Hero is the same rarity of the base Hero, the base Hero will receive a free Level Up.

As the characters are used in battle, they can level up after obtaining Experience Points, of which the gains scale based on the difference in Level between the player's character and the enemy's. EXP also scales depending if the player's character killed the enemy. Upon leveling up, their stats will increase randomly, though SP are always guaranteed and increase the amount gained every 10 levels. Heroes can expend SP to acquire new skills for the Heroes. The Skills available to learn are fixed to each character and require the Hero to be a certain rarity to learn. Skills come in 4 categories; Weapon, Attack/Heal Skill, Support Skill, and Passive Skill. Weapon Skills increase the Hero's weapon base damage and carries special effects the higher the weapon's Rarity are. Visually, the Hero's weapon in combat and on the battle map will also match. Attack/Heal skills provide bonuses when either attacking or healing. These skills require the Hero to attack, heal, or be attacked a certain number of times in order to activate. Support Skills are activated by having a Hero select an ally unit to give them a supportive effect. These includes Healing, Rally, and Dance commands. Passive Skills are a series of skills with various effects that can influence combat (such as Life and Death, self stat bonuses, adjacent allies bonus stats, and other various map skills (such as Obstruct).

Players expend stamina points to begin battle in Battle mode and each map has a set amount of stamina required to begin. All maps are on a 6x8 grid, though maps come in various terrains based on past Fire Emblem games. Maps features a plethora of terrain including forrest, mountains, lava fields, and oceans. Character's movement varies; Units riding mounts can move a maximum of three titles, basic foot units can move two spaces, and heavy knights are restricted to a single tile for movement. If the HP of the player's Hero is depleted, the character will retreat from battle, but can be used in subsequent battles, regardless if the player had lost all characters in a single duel, hence having more of a Casual Mode style of unit handling.

A unit's combat capabilities are set, restricting them to a single weapon, regardless if the class in the main series is able to use multiple weapon types. The Weapon Triangle and Anima Magic is used in a singular weapon effectiveness wheel along with Breath attacks. Blue weapons (Lances, Thunder Magic), Red weapons (Swords, Fire/Dark Magic), and Green weapons (Axes, Wind Magic). Blue weapons are strong against Red weapons, Red weapons are strong against Green weapons, and Green weapons are stronger than Blue weapons. There are also Colorless weapons (Bows, Shuriken, and Staves), but these are not factored into Heroes Weapon Triangle unless a specific weapon designates it so. Bows retain their special property of dealing effective damage against Flying Units, Shuriken can lower enemy stats, and Staves can still heal allies as well as attack enemies, but are weak in damage. All Sword, Lance, Axe, and Breath attacks are from one tile away while all Magic, Bow, Shuriken, and Staff attacks are from two spaces away.

Prior to the launch of Fire Emblem Heroes, the game's official website went live with the Choose Your Legends event. From January 18 to January 31, 2017, visitors to the website could vote for one character per day. The top male and female characters to receive votes will receive recruitable "Choose Your Legends" variant designs with special outfits. The top ten male and female characters will also be featured in monthly calendar mobile phone wallpapers to be distributed from March 2017 to December 2017.

All playable characters, major villains, and select major NPCs from each entry in the franchise are eligible to receive votes.

On February 8, 2017, the top twenty male and female characters to receive votes were announced via Nintendo of America's Twitter account:

Fire Emblem Heroes includes a large roster of characters from across the full history of the franchise, along with some original characters.

Fire Emblem Heroes features the main theme of the Fire Emblem series with lyrics, and various background music tracks from other games in each world of the Story Mode. 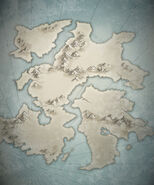 The world map of Zenith.

An illustration from Fire Emblem Heroes.

An illustration from Fire Emblem Heroes.

A screenshot from Fire Emblem Heroes.
Add a photo to this gallery