Start a Wiki
watch 01:17
Fire Emblem Warriors Trailer
Do you like this video?

Fire Emblem Warriors (ファイアーエムブレム無双, Faiā Emuburemu Musō, Fire Emblem Musou) is an upcoming hack and slash game for the Nintendo Switch and the New Nintendo 3DS. This collaboration between Intelligent Systems and the Koei Tecmo studios Omega Force and Team Ninja is a crossover between the Fire Emblem series and Koei Tecmo's Warriors franchise.

Fire Emblem Warriors marks the second time a Nintendo IP has received a Koei Tecmo Warriors styled game, the first being Hyrule Warriors. It also marks the third time Nintendo characters have appeared in a Warriors game: the first was Takamaru from The Mysterious Murasame Castle, who appeared as a guest character in the Wii version of Samurai Warriors 3.

Fire Emblem Warriors was briefly showcased during the Nintendo Switch Presentation on January 12, 2017. The trailer briefly teased Chrom from Fire Emblem Awakening. During a Fire Emblem Nintendo Direct, gameplay was shown of Chrom in battle. The trailer concluded with a slated release of Fall 2017 and a version developed specifically for the New Nintendo 3DS was also announced for a Fall 2017 release. In an article on the game in the Japanese magazine Famitsu released the week of May 30, 2017, it was confirmed that the bulk of the game's roster will be comprised of characters from Fire Emblem: Shadow Dragon, Awakening, and Fates, in addition to original characters created for the game.

That day, the country of Aytolis was covered in uttermost darkness. There was no warning when the Gates of the Other World suddenly appeared in the royal castle. Then, powerful monsters gushed out one after the other, trampling the castle garrison.

—The royal castle quickly fell. And slowly but surely, darkness ate into the country.

However, there is still hope. The two shadows who escaped the royal castle covered in flames were Rowan and Lianna, the children of the late king. And then, the thread of fate spun by the legendary heroes began to spin…

Carrying the Fire Shield given to them by their mother, the two heroes’ journey to confront the powerful darkness begins here.

As a part of Koei Tecmo's larger Warriors franchise, Fire Emblem Warriors is a hack-and-slash action game in which the player fights in battlefields populated with hundreds of enemies. The player can execute combos to cut through enemies while working toward completing a series of stage objectives. Each playable character also has a unique special attack (called a Musou attack in other Warriors titles) that can be executed when the special attack gauge is filled.

A special stun gauge appears for enemy officers, in addition to their health gauge. When the stun gauge is depleted, the player character can unleash a critical strike, which is accompanied by a flourish similar to the critical attack flourish in titles like Fire Emblem Awakening. Players can switch between control of multiple playable characters on a battlefield, and can control up to a maximum of four characters in a given battle. Any player character not under the player's direct control will act as an AI character and can be given directions on the map screen.

The game also features a pair-up mechanic inspired by the pairing mechanic seen in Awakening and Fates. When approaching another playable character on the battlefield, the player has the option to pair up with that character. This action will remove the second playable character from the battlefield, but will boost the stats of the character under the player's control. The player may also swap back and forth between control of each unit in the pair.

Mounted units such as cavaliers and Pegasus Knights are playable, with the character remaining on their mount at all times. With their ability to fly, Pegasus Knights can traverse aerial routes, but this is countered by their traditional weakness to archers.

When the player character levels up, the action pauses to display a Fire Emblem-style Level Up screen. This can be toggled off in the menu if players don't wish the action to be interrupted.

The permadeath mechanic is represented in the game. Characters lost during the course of the story do not die, but as with story-important characters in traditional Fire Emblem titles, they sustain injuries that prevent them from rejoining the battle. There also exists a Casual Mode that turns permadeath off.

* While both genders will be available in-game, Female Robin will not be playable during Story Mode. 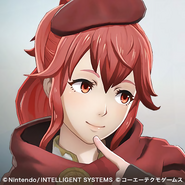 The Shield of Seals in Fire Emblem Warriors.

Rowan and Lianna crying out for their mother. 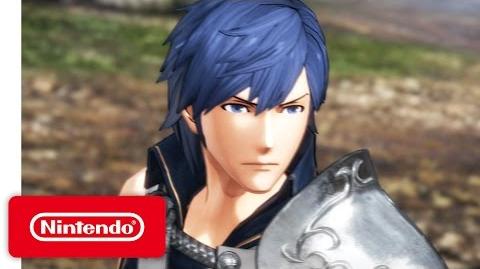 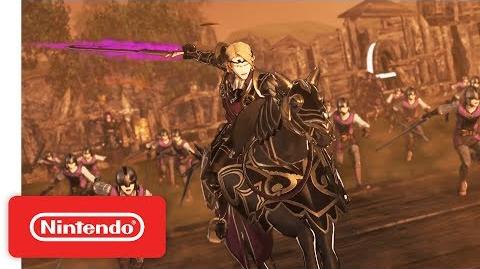 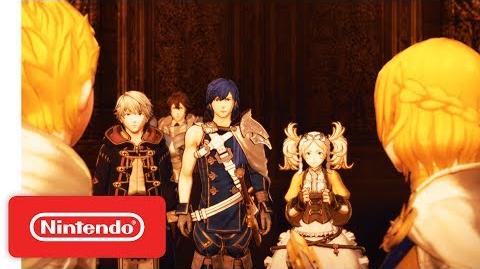