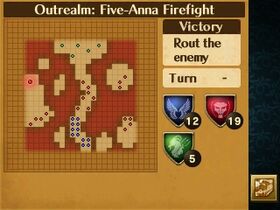 Route the Enemy
Protect All 5 Annas (To recruit Catria)

Middle Sister Catria (all 5 Annas must survive the chapter)

Chapter script
[view]
“Five Anna sisters are mining ore in a lava cave when they are surrounded by enemies and end up falling into a life-threatening predicament.”
—Opening Narration

Five-Anna Firefight (The Five Annas in the Japanese version) is Xenologue 20 of Fire Emblem Awakening. This chapter takes place in the Outrealms.

This map tasks you with dealing with several waves of enemy units that will swarm the map in large numbers each turn. The walkable terrain is limited and a vast majority of the map is nothing but flowing lava and some walkable cool lava. Much of the walkable terrain is hazardous and standing on one will result in 10 HP of damage at the start of the player's turn.

You are also tasked to protect five Annas separated from you by a distance. The Annas are weak and cannot withstand many enemy attacks, so you will need to plan well to prevent the Annas from being attacked by the enemy. Because they do not move and for the fact that all 5 stand on hazard tiles, each Anna will take 10 HP each turn.

If all 5 Annas survive the map, you will receive a Catria Einherjar card.

First and foremost, bring your most potent healer who can use Fortify. All 5 Annas have 65 hitpoints, though they will lose most of their health by turn 7 (the hazard tiles will never kill). Despite their high health, their stats are very poor; almost any enemy can double them (and most likely kill them in the process), so clearing this chapter quickly is a must if you want to recruit Catria.

Rescue CANNOT be used in this Xenologue; Anna will inform you of this at the start of the Xenologue, claiming that thieves kept coming to steal ore from them. Therefore, you cannot use Rescue to transfer units into the west/east isles or move the Annas out of the hazard tiles.

There are three large isles inside; two on the sides, and one in the middle. There is a mix of Wyvern Lords and Griffon Riders on the west, while Dark Fliers and Falcon Knights are on the east. In the middle (where you start), there are only Generals and Snipers, all placed away from the hazard tiles. It is important to note that the lava separating each isle can be flown over, but a flier cannot stand above them. This means they will have to move to a ground tile and cannot immediately rush towards the Annas.

The first wave of aerial reinforcements will arrive at the earliest on turn 3 (even on Lunatic). Killing the boss on turn 1 (with Galeforce) and then all remaining enemies on turn 2 and 3 will allow you to pass the level in just these three turns, without having to to worry about the Anna's at all. Do keep in mind that some of the enemy flyers (the South-west and South-Eastern ones) will not attack your units, even when they are within attacking range. At least 2 Galeforce flyers are needed to clear out all of these units within the first 3 turns.