The Flame Emperor (炎帝) is a class that first appears in Fire Emblem: Three Houses. It is unique to the Flame Emperor's true identity while using this persona.

The Flame Emperor is functionally similar to the Armored Knight, bearing a proficiency for Axes, Authority, and Heavy Armor. As an enemy class, it is completely unplayable but does have growth rates. Compared to the Armored Knight, the Flame Emperor's stats are more spread out and well-rounded, losing 5% and 35% to their Strength and Defense growths respectively to patch up its weaknesses, notably its Speed and Resistance. Interestingly, though the class cannot use magic, the class does have a 10% growth in Magic, possibly hinting the above-average magic growth rate of their true identity.

The Yan Emperor (Chinese: 炎帝; pinyin: Yán Dì) or the Flame Emperor was a legendary ancient Chinese ruler in pre-dynastic times. Modern scholarship has identified the Sheep's Head Mountains (Yángtóu Shān) just north of Baoji in Shaanxi Province as his homeland and territory.

A long debate has existed over whether or not the Yan Emperor was the same person as the legendary Shennong. An academic conference held in China in 2004 achieved general consensus that the Yan Emperor and Shennong were the same person. Another possibility is that the term "flame emperor" was a title, held by dynastic succession of tribal lords, with Shennong being known as Yandi perhaps posthumously. Accordingly, the term "flame emperors" would be generally more correct. The succession of these flame emperors, from Shennong, the first Yan Emperor, until the time of the last Yan Emperor's defeat by the Yellow Emperor, may have been some 500 years[3]. 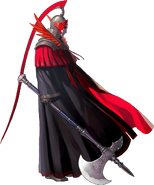 Full artwork of the Flame Emperor.

Model of the Flame Emperor class.

Class sprite of the Flame Emperor class.
Add a photo to this gallery