The Flame Shuriken is particularly useful for Felicia, who has very poor strength growth but good magic growth. It is useful for any shuriken-using class for taking on more physically-oriented classes, such as Knights.

The shuriken (手裏剣) was a common throwing weapon for ninja, and its name can mean "sword hidden in the hand", or "the sword inside of hand". These were flattened, bladed discs that were thrown at enemies. 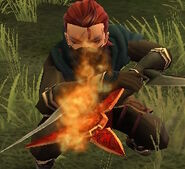