Tara Platt
[view]
“For the sake of history and all our fallen comrades... We will bring this empire crashing down!”
—Flavia talking to Chrom in Chapter 18

Flavia is a playable character from Fire Emblem Awakening.

Like her friendly rival, Basilio, Flavia is one of the Khans of Ferox; the East-Khan. She is a potential mother of Morgan.

With Plegia's continuing attacks and the new threat of the Risen, Chrom came to Ferox for aid. However, Chrom had to deal with the border guard Raimi, who mistook Chrom and the Shepherds as Plegians due to the Plegians constantly attacking Ferox with "Ylissean" soldiers. After a short battle, Chrom defeated Raimi, who led them to Flavia. Chrom asked Flavia if she could help the Ylisseans with Plegia. Flavia told Chrom she would help, but because she was not the head Khan, she did not have the power to do so. Flavia was impressed how Chrom was able to defeat Raimi, and appointed him as her champion for the upcoming tournament.

Basilio's former champion was Lon'qu, but he was defeated by "Marth", so "Marth" became his new champion. Chrom and his group face off against "Marth" and his group, defeating them. With Basilio's champion defeated, Flavia became the head khan and as promised, began to mobilize Feroxi troops and supplies to help Ylisse against Plegia.

Flavia, along with Basilio, accompany Chrom to Plegia, where they witness Emmeryn's "death". After returning to Ylisse and preparing a large attack, Flavia sends a messenger to Chrom to report how the Plegians are deserting en masse, due to Emmeryn's words. When Gangrel is defeated, Flavia sends a negotiator to meet with the Plegians to discuss a truce, and mourns the Feroxi soldiers lost in battle. Chrom apologizes to Flavia for bringing them into the fray and promises to recompensate them, though Flavia tells Chrom not to worry as she saw Plegia's treasury and that it was more then enough for both Ylisse and Ferox.

Two years after the defeat of Gangrel, the continent of Ylisse is threatened by the continent of Valm lead by Walhart the Conqueror. Basilio and Flavia round up troops from Ferox to join the Ylissean army to quell the impending invasion. After capturing Fort Steiger, word arrives that the armies sent to attack the Valm to the north and the Chon'sin country to the south were crushed. Robin suggests sending a small group to the north to stall Walhart, which Basilio volunteers to lead.

Lucina warns Basilio that he will die if he goes since in the same attempt in her time, Basilio dies. Basilio still decides to go, but Flavia joins him to increase his odds of survival. However, upon entering Valmese soil a single figure begins to mow down the force, Walhart. Walhart and Basilio engage in battle, leaving Basilio gravely wounded. Flavia joins in and protects Basilio enough for him to land one great blow on the Conqueror. However the Conqueror still stands and deals the final blow to Basilio. Flavia tries to help Basilio recover, but knowing the extent of his wound, he gives Flavia the red Gemstone, Gules, to deliver to Chrom and tells her to leave him before she is killed. Flavia quickly rushes back to Chrom's army and deliver's the news of the West-Khan and gives Chrom the gemstone Gules to place in the Fire Emblem.

Fate of the World

After Validar takes the Fire Emblem to The Dragon's Table, Chrom and Robin arrive to stop him. However, like in the alternate future, Robin is "possessed" by Grima and "kills" Chrom. However this turns out to be a clever ruse by Chrom, Robin, and most importantly Flavia and Basilio, who survived his battle with Walhart. With the the two Khans on the battlefield, they take down Validar for good. However with the resurrection of Grima, Flavia continues on with Chrom and works with him to take down the Fell Dragon.

After the war, Flavia returned to Ferox and restored her country back into its original glory. Whenever time for another Feroxi Tournament was around, she would always ask Chrom for assistance as her champion.

She is a brave, heroic, strong-minded woman, like a reliable big sister. She is a hero of women who yields to no man, but treats her opponents equally no matter who they are. She has a side of her that pays attention to her surroundings and has an attention to detail.

While both Khans are on good terms with each other, Flavia tends to threaten Basilio whenever he unintentionally angers her. She likes doing push-ups the most in the army.

Although Flavia is intoduced quite early on, she does not join Chrom's army until Chapter 23. In Normal Mode, Flavia essentially plays the stereotypical role of a promoted unit: she joins promoted, but has base stats that are lower than units that have grown since their non-promoted class. The low difficulty of Normal Mode makes her usable, but not anything that instantly stands out. In Hard Mode, this is a bit less so, as her starting stats are a bit higher, and can be a more of a formidable unit with her well-balanced stats. However, in Lunatic Mode, her bonuses are stockpiled even further, to the point where she becomes close to capping her speed once reaching level 20. Her advantages as a unit become more noticeable, and she and her partner Basilio become more noticeably usable if a filler character is desperately needed. Flavia's bases make her much closer to par than she would be in lower difficulties. She may have a slight issue with magic users, but she can still be a very formidable unit.

Flavia has already been developed decently as a Hero but will require another 5 levels to learn Axebreaker. She already has learned her Mercenary skills so she can preserve strong weapons much longer than most other units. As a Bow Knight, a few of her maximum stats are lower in exchange for additional movement. Virion or Noire are stronger choices for Bow Knight since they can grab Bowfaire from the Sniper class, but Flavia can still spend some time in the class for growth and for Bowbreaker, making her a good choice for an Archer killing class.

The Thief line offers some interesting skills as well. Movement +1 is always a good skill to have, and Flavia can make use of it as well as any other unit. The Assassin class offers the ever-so-useful ability in Pass, as well as Lethality if the chance to instantly kill an opponent is desired. However, the huge drops in defense caps can be discouraging for Flavia to permanently stay in that class. The same applies to Trickster; Flavia prefers the balanced caps of the Hero class, but Acrobat is definitely a useful skill for her to acquire. Overall, Flavia is best suited to stay in her Hero class, but some additional skills are definitely useful for her to look at.

Feroxi East-Khan
East-Khan of Regna Ferox, a country led by its preference for battle over politics. Boldly faces even the most perilous situations without fear. Appears in Fire Emblem Awakening.

After Grima was vanquished, Flavia returned home and did a marvelous job of whipping Regna Ferox back into shape. They say that each time a tournament drew close, she would ask Chrom to lend his sword.

Flavia and Robin
Many wrote of Robin's legendary exploits, but accounts of his origins and character varied. Scholars, poets, and bards agreed on one thing alone--he loved his wife, Flavia, above all else.

Flavia is illustrated in the trading card game Fire Emblem Cipher with the following card: 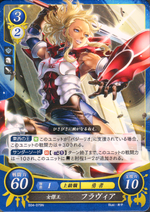 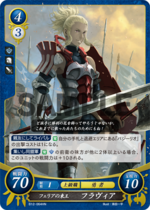 Flavia's name is an Italian variation of the Latin surname "Flavius". Both names mean "blond," or "with blond hair," likely referencing her hair color.

The Flavian Dynasty was a Roman Imperial Dynasty which ruled the Roman Empire between the years 69 and 96 AD and is known for several significant military accomplishments.