Soldier in the Imperial Army

Eden Riegel
[view]
Fleche is a character from Fire Emblem: Three Houses. She is Randolph's younger sister and the daughter of the previous Count Bergliez's second marriage, making her Caspar's aunt.

Fleche was born between the previous Count Bergliez and his second wife. Though he preferred his second wife, his ailing health forced him to pass his title onto his eldest son, Caspar's father, rather than to Randolph. At some point in time, Fleche joined the Imperial Army to follow Randolph.

Fleche is first seen after the timeskip with her brother Randolph, who introduces her to Byleth. She tells them that she serves as an administrative worker, and although inexperienced, promises to do her best to help the war effort. Randolph later dies of his wounds following a surprise attack on the monastery from the Church, saddening Fleche, but she resolves to continue on to honor his memory. Unlike the Azure Moon route, she does not attempt to get revenge.

She expresses dislike that her brother had settled all of his personal affairs, but not his work, though despite this she does her best to finish up what he left behind. She states that she will take a vacation and a well-deserved rest with her mother once the war is over.

Fleche accompanies Randolph after he is assigned to keep an eye on Garreg Mach Monastery for any suspicious activity. Upon learning that the Knights of Seiros have returned and set up base, he assembles his troops to confront them. Although Fleche wished to accompany him, he refuses to let her head to the front lines out of account for her age and out of fear for the one-eyed man that has been brutally murdering Imperial troops.

After learning of Randolph's death, Fleche (as "Maiden") infiltrates the Kingdom army's ranks under the guise of an orphaned villager to avenge her brother. Upon seeing Dimitri, she immediately connects him with the rumored one-eyed man. She makes her move after the Battle at Gronder Field, attempting to assassinate Dimitri and managing to stab him once. Before she can fatally wound him, however, Rodrigue takes the blow and Byleth kills her. She begs her brother to help her before dying, never learning that she was mistaken on her target for revenge; Byleth was the one who killed Randolph, to spare him from being tormented by Dimitri.

Fleche attempts to avenge her brother. 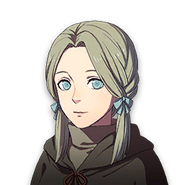 Fleche's portrait as the "maiden".
Add a photo to this gallery