Flora (フローラ Furōra) is a playable character in Fire Emblem Fates and an ally on the Conquest and Revelation routes. She is voiced by Ai Kakuma in the Japanese version, and by Julie Ann Taylor in the English version.

Flora is the older twin sister of Felicia and a maid for the Nohr royal family, serving the Avatar. She is the daughter of the Ice Tribe's chieftain, Kilma. Their father always treated Felicia more favorably due to her superior fighting ability, however, Flora was still expected to become the Ice Tribe's next leader. The player can recruit her in the My Castle once the Fire Orb reaches level 3 or after Chapter 19 of Conquest. In Revelation, the player can recruit her once the Ballista, Fire Orb, or Launcher reaches level 3 or after Chapter 22.

Although she is the Avatar's servant, Flora and Felicia were actually kidnapped by King Garon as hostages to prevent the Ice Tribe from staging a rebellion against the Nohrian Kingdom. Flora was aware of this while Felicia was not. Forced into servitude for the Avatar, she eventually became accustomed to her role, becoming an exemplary maid. She also struck up friendships with the Avatar, their combat instructor Gunter, and developed feelings for Jakob, the Avatar's butler.

One day, as Flora and Felicia were tending to their daily duties as the Avatar's maids, they awaken them using their ice powers. Although the Avatar mulls over the dream they had, they are summoned by Xander for their final test. After the Avatar finally earns their right to leave the Northern Fortress, Flora stays behind and stays with either Jakob or Felicia depending on the Avatar's gender.

After leaving Mount Garou, Takumi develops a severe fever. Infiltrating a Nohrian stronghold to retrieve some medicine for Takumi, the Avatar encounters Flora who offers to help him find the medicine they need. Iago appears and immediately attacks Flora. Seriously wounded, Flora has no choice but to sit out of the battle. After fighting their way out of the stronghold with the medicine in hand, the Avatar gives Takumi the medicine he needs and Flora offers to take everyone to the Ice Tribe village to rest. With Felicia's own excitement from the idea, the Hoshido army follows along.

Arriving at the village, Flora leaves for a short period of time only to return with several local tribesmen ready to attack the party. Flora betrays the army, stating that the Avatar betrayed Nohr and that Garon ordered that all of them be executed. After a skirmish in the village, Flora is defeated. Confused as to why Flora would attack the Avatar, Flora reveals that Garon had threatened to kill her and the rest of the Ice Tribe if she did not take the mission to kill the Avatar. Ashamed for trying to kill her former liege as well as her beloved sister, Flora sets herself ablaze. After failed attempts by the Avatar, Felicia, and Jakob to put out the enchanted fire, Flora feels too guilty to stop herself and eventually dies from self-immolation.

Later on, in Birthright Endgame, she appears in the Avatar's near-death experience alongside Xander, Elise, and Lilith. She tells the Avatar how proud she is of them and promises that she will always be watching over them.

Flora appears in Chapter 8, where she once again appears as an enemy unit, but under different circumstances. After the Avatar loses consciousness from a snow storm, both them and Silas are found by her father, Kilma, not knowing that they were sent by Garon to suppress the Ice Tribe's rebellion. The Avatar starts to lose their cover when they are recognized by Flora, who referred to them as her "liege". After Elise unintentionally blows the Avatar's cover by outright stating that they were at the Ice Tribe Village to put down their rebellion, Flora and Kilma then attempt to fight back.

After the battle, since the Avatar only wanted to stop the Tribe's rebellion without killing anybody (but not limited to injuring people in self defense), both Flora and Kilma are spared along with their tribesmen. The Avatar explains to both her and Kilma that they simply wished to end the matter peacefully and even denounced their faith to Garon to them. They believe the Avatar and promise to stop the rebellion and await for the Avatar's revolution to succeed. The Avatar and their Nohrian allies return to Windmire while Flora stays behind with the rest of her tribe.

Like in Birthright, Flora is ordered by Garon to kill the Avatar or be killed by him along with her entire tribe. While the Avatar is at sea to travel to Cheve, she freezes the ocean to allow Camilla and her soldiers to board the ship. After the battle, the Nohrians are defeated in battle. She notices the glowing Yato and believes that the Avatar is the hero spoken of in her people's legends. Believing that the Avatar is the key to stopping King Garon, she declines the Avatar's offer to join their army at that moment. Fearing for the safety of her people, Flora promises to return to the Avatar once she is able to smuggle her people away from Nohr to safety.

Flora eventually fulfills her promise to join the Avatar's army starting once Chapter 22 has been completed and at least one My Castle turret has reached level 3.

Unlike her younger, clumsy twin sister, Flora is a skilled maid and always perform her tasks in a timely, flawless manner. The male Avatar notes that she is particularly hard working, but keeps her mood calm at all times. If she ever has strong emotions, she tends to let her ice powers go wild to help "cool herself", though it usually results in a large blizzard in the vicinity of her. Underneath her capable and professional exterior, she is a deeply insecure and troubled individual, having grave self-esteem and anxiety issues, and does not value her own life. In her S-support with a male Avatar, as well as her A-support with Felicia, it's revealed that her self-esteem issues stem from her ineptitude at fighting, and that the reason why she tries so hard at being a capable maid is because it gives her confidence. When it appears the Avatar is dismissing her from her job, she has a mild breakdown and states that if she were to quit being a maid, her life would have no meaning.

Due to being the daughter of the tribe chief, and in contrast to Felicia, who gladly follows her heart, she is quite proud and responsible in adhering to whatever duties may fall on her shoulders, placing them above her own personal desires and emotions. Her Private Quarters dialogue, her support with the Female Avatar, and her boss conversation with Jakob all imply that she's long since given up on her own happiness. This can range from devoting herself wholly to serving the Avatar to the point of frequently exhausting herself, to fighting against close friends and family in order to protect her village.

Of their servants, she's the only character who is not devoted to their utmost to the Avatar. When Jakob tries to point out that she's renounced her vow of loyalty by betraying them in Conquest, Flora shoots back that she never swore loyalty to the Avatar in the first place, only being made to serve them due to being a prisoner. In Birthright, Flora lashes out at the Avatar during their battle dialogue, exclaiming that they do not even know her real self. After the Avatar proves how much they care for her when they go out of their way to avoid harming her and the other Ice tribe members in their battle, Flora is so touched she insists on retaking her vow of loyalty, and from then on truly devotes herself to the Avatar.

While Felicia looks up to her for her flawless maid skills, Flora is envious of Felicia for her stronger fighting skills. Flora feels that Felicia is stronger in character, as she is willing to always stay by the Avatar's side, refusing to back down to intimidation. In both Birthright and Revelation, out of fear for her own life and her people's safety, she decided to go against her former liege and sister so King Garon would not execute her and the Ice Tribe. While she lives in Revelation after this ordeal, in Birthright, feeling guilty for her mistaken choice, Flora takes her own life as a means to atonement.

She has the most powerful jealousy out of everyone in the army. Her birthday is February 19.

*Flora has access to the Cavalier, Knight, Fighter, Outlaw, Wyvern Rider, Troubadour, Samurai, Apothecary, Ninja, Oni Savage, Spear Fighter, Shrine Maiden, Diviner, Sky Knight, or Archer class only if she marries an Avatar with that class as his secondary class.

Flora as a Maid by Rco Wada.

Artwork of Flora as a Troubadour by Pisuke in Fire Emblem 0 (Cipher).

Flora as she appears in Fire Emblem 0 (Cipher).

Flora as a Troubadour by Pisuke in Fire Emblem 0 (Cipher). 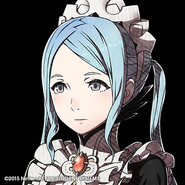