Julie Kliewer
[view]
“W-Well, what was I supposed to do? All those bees came flying out at me! I was so frightened...”
—Florina to Lyn in a support conversation

Florina (romanized as Flolina in the Fire Emblem Museum) is a playable character in Fire Emblem: The Blazing Blade. She is the younger sister of Fiora and Farina as well as a close friend of Lyn. Her pegasus name is inconsistent, but most of the time it is Huey.

Florina is a pegasus knight-in-training from Ilia. she had befriended Lyn prior to the events of The Blazing Blade when she was in Sacae. During this encounter, she had fallen off her pegasus steed and was entangled in a tree. Lyn eventually found her caught in the tree when she was attacked by a swarm of bees. Lyn helped her down, and from then on, the two quickly became friends.

Florina begins a search for Lyn after she learns about her departure for Caelin. She accidentally lands her pegasus, Huey, on Migal, the leader of a band of Ganelon Bandits. They are about to capture her when Lyn and her party arrive on the scene and save her. At the end of the rescuing, Florina resolves to join Lyn on her journey to Caelin to meet her grandfather. After Lundgren's defeat, Florina is made a knight of Caelin, when Lyn assusmes as the legitimate heir.

A year later, Florina is one of the few survivors of Caelin’s occupying garrison, along with Kent, Sain, and Wil, driven out by Darin’s forces when they laid siege to Caelin. Eliwood and Hector arrive on the scene shortly after, and Florina volunteers to make contact with them and request their aid. In a dramatic turn of events, Florina is targeted by an enemy Archer, and in her attempt to avoid being hit, she loses control of Huey and they both hurtle to the earth. Their fall is broken by an unsuspecting Hector, and Florina barely succeeds in her mission. Regardless, Eliwood and Hector are able to aid Lyn in retaking Castle Caelin from this point on. Following this, Florina then decides to follow Lyn when she decided to join Eliwood and Hector on their journey.

At the end of this journey, Florina will return to Ilia and become a full-fledged Pegasus Knight. Depending on her supports, Florina's endings may be altered; she could either retire to the Sacaen plains with Lyn or marry Hector and thereafter giving birth to Lilina.

Florina is notable for being chronically shy around the other characters, especially men and archers. Her shyness is not exclusive to these specific groups of people, as her supports with Serra also reveals a certain degree of reserve even when interacting with women. Florina's social anxiety is known to have been much worse when she was younger, as she used to cry herself to sleep every night. Her sister Farina did not help matters, as she tended to make Florina cry during practice session frequently.

Despite this, Florina behaves differently around people with whom she is familiar with and have forged strong bonds. She speaks to her sisters and close friend Lyn with a more natural, confident cadence, as compared to her usual stammers and tendency to lapse into awkward silences. In her supports with Farina, Florina becomes a very different person when she is at a festival, and is at one point described as "start[ing] [to come] out of her shell". Florina is entirely given to accepting the way she is, as she recognises that she will never become her own person if she keeps relying on other stronger people to look out for and take care of her.

Description: A pegasus knight earning her title. A friend of Lyn's.

* Unlike inventory changes, stat changes do only apply if Lyn's Story is skipped.

While flying movement and early jointime in all story modes already gives her great utility, Florina's usefulness is greatly determined by whether the player chooses to play Lyn's Story or if they decide to skip it.

Florina starts rather weak and fragile due to her low bases, but in Lyn's Story she can gain a lot of experience, which allowing her to take advantage of her good strength and decent speed growths. This way she can start contributing in combat right after joining in Hector's or Eliwood's Story, and it gives her the opportunity to promote before reaching the Dread Isle. Thus she can start off as a decent flier without having much trouble, and grow into one of your best mounted units during mid- and lategame.

If Lyn's Story is skipped, Florina will join at level 3 with slightly higher stats compared to her level 1 bases, but will usually be a lot weaker than she would coming from Lyn's Story. In this case, her relatively low base strength and defensive stats combined with her low constitution makes it hard for her to win a lot of fights on higher difficulties as Hector Hard Mode, so she might have trouble getting enough experience to grow. Despite that, she can still be quite useful by carrying your slower infantry units towards their destination point, even if you decide that training her at this point causes more trouble than it's worth.

Her Resistance is solid, despite being lower than Fiora's and Farina's Resistance stats, which proves to be useful when fighting against lategame mages with long range tomes and status staffs. However, Florina has very low Defense and HP growths, so archers can easily take her down or leave her vulnerable to the next enemy attack, especially before promotion. Her Constitution is too low to effectively use heavier lances (even after a Body Ring, even though it will be useful), but after Promotion she can use swords without suffering from the heavy speed penalties of lances.

She can be a fantastic counter to Wyvern Lords, should she get a C-rank in swords, due to the Wyrmslayer's extremely low weight, which allows her to wield it without speed penalties. It's the most powerful of the 4 weapons she can wield without a speed penalty, as the others have very low might, where as the Wyrmslayer's might is comparibly high, at 7, or 14 (21 in the Japanese version), should she be fighting a Dragon. As a flier, she can easily reach them, and possibly triangle attack, should her sisters be nearby.

Azure-Sky Knight
Florina, having grown during her time with Lyndis's Legion. With Lyn's encouragement, she has redoubled her focus on bow training. Appears in Fire Emblem: The Blazing Blade.

At the start of Chapter 16

After Lyn abdicated rule of Caelin, Florina returned to Ilia. She remained shy, but this shyness has made her strong within.

When her grandfather died, Lyn asked that Caelin be taken under Ostian protection. She set out for Sacae with her friend Florina. Though Florina returned to Ilia, their friendship lasted forever.

Hector succeeded his brother as the marquess of Ostia, but the pain of his brother’s death weighed heavily on him. His beloved Florina gave him comfort and helped him become an enlightened leader.

Florina is illustrated in the trading card game with the following cards: 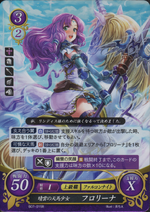 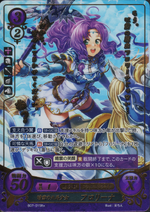 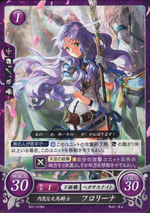 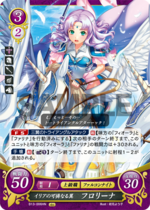 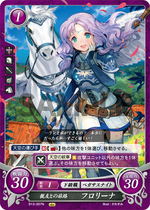 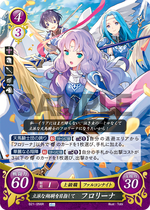 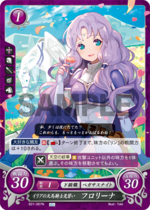 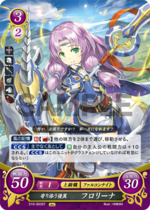 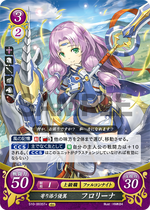 Florina is a Romanian girl's name and a combination of Latin word "Fiore", which means "Flower" and the diminutive suffix "-ina" which means "Little", and can be translated as "Little Flower". It also shows a connection to Lilina, who's name means "Little Lily", as one of her three possible mothers, if she marries Hector.

The name also has origins in geography; Florina is a prefecture in northwestern Greece, along the Macedonian border.

'Huey' is a nickname for 'Hugh,' a Germanic name which means 'heart, mind or spirit'.

"Huey" is also the nickname of the popular UH-1 Iroquois helicopter used by the U.S. military.