Pegasus Knight
[view]
“W-Well, what was I supposed to do? All those bees came flying out at me! I was so frightened...”
—Florina to Lyn in a support conversation

Florina (フロリーナ Furorina, Flolina in the Japanese version) is a playable character in Fire Emblem: Rekka no Ken. She is one of the three Pegasus Knight sisters from Ilia, and a close friend of Lyn's. Her Pegasus is named Huey.

Florina is a Pegasus Knight-in-training from Ilia. She has two older sisters, Farina and Fiora, both Pegasus Knights. One time when she was in Sacae, she fell off her pegasus, Huey, and landed in a tree. She was found by Lyn caught in the tree being attacked by a swarm of bees. Lyn helped her down, and the two became fast friends.

In Lyn's Story, when Florina learns that Lyn has departed for Caelin, she searches for her in the Taliver Mountains. She accidentally lands Huey on Migal, the leader of a band of Ganelon Bandits. They are about to capture her when Lyn and her party rescue her. She joins with Lyn and goes with her to Caelin. After Lundgren's defeat, Florina is made a knight of Caelin.

In Eliwood's Story, she joins the party along with Lyn when Eliwood aids Lyn in retaking Caelin. Her default ending is returning to Ilia to become a full Pegasus Knight. Her alternate endings include retiring to the plains with Lyn or marrying Hector and living with him in Ostia, which would make her the mother of Lilina.

Florina is a very shy Pegasus Knight, especially towards men and archers. In a support with Serra the cleric it is noted she is reserved even when talking to women. Although she is shy, she is very different when at a festival once she "starts coming out of her shell" (revealed in B support with Farina). It is revealed she used to cry herself to sleep every night. Farina could also make her cry at every practice. She hopes to become like Fiora, whom she really loves. Florina realises that if she keeps letting her eldest sister protect her and she becomes dependent on Fiora, that she will never become her own person. Despite her general fear of most men, she seems to have a small crush on Hector after he saved her from falling. However, she has trouble thanking him because of her timidness.

Throughout the game there are several inconsistencies in the information given during various support conversations about her Pegasus.

In her level B support with Hector, it is revealed that her pegasus' name is Huey. However, if Hector talks to Florina during Noble Lady of Caelin, she calls her pegasus Makar.

Although it is Huey who lands on Migal, Florina responds to Migal when he speaks of selling the pegasus, "Don't you touch her!". Huey is also called a mare (female horse) in Florina's C support with Nino. This is odd, since Huey is primarily a male name and later she refers to the steed as a male in a support with Hector.

Description: A pegasus knight earning her title. A friend of Lyn's.

Florina's greatest strengths are her Speed, Skill and Luck growths. She will easily max her Skill because of its low cap. She also has a good chance of maxing her Speed, but not her Luck, although it will probably get close to the cap. Her Resistance is solid, despite being lower than Fiora and Farina's Resistance stats. However, Florina has very low Defense growth and HP, so archers can easily take her down, especially before promotion. Her Strength growth is not that bad, but her starting stat for strength is very low, so she will always be inferior concerning Strength compared to Farina and will be even with Fiora lvl 20 promoted (However, with the low strength cap it is certainly not impossible for her to cap it, because of the solid 40% growth, and the extra levels one can invest.) . Her Constitution is too low to effectively use heavier lances (even with 1 Body Ring, even though it will be useful), but after Promotion she can use swords and use them without suffering from as large of speed penalties as with Lances. She has very high Avoid and fantastic Hit. Florina joins earlier than any other aerial unit, making it easier to level her up faster.

At start of chapter 16

Florina and her two sisters, Farina and Fiora, are able to perform a special attack known as a Triangle Attack if positioned correctly before engaging in combat. The picture on the right shows you how to do it:

The three sisters do not have to be in that exact position. As long as all of them are adjacent to the enemy, the Triangle Attack will occur. This attack has 100% accuracy and a 100% critical chance, making it very useful against bosses that the player is having a hard time killing. Note that the triangle attack does not modify the Mt of the attack; it only changes the accuracy and critical hit chance. Therefore, it is most effective to initiate the attack with the sister that has the highest Strength stat. Be careful, as no matter what speed the player has, she will only perform the triangle attack once. In addition, you may only perform a triangle attack if you initiate the battle; it will not occur when counterattacking enemies. The attacking character will also say something to the other two, and a special attacking animation featuring all three of the sisters will play.

Florina - Pegasus Knight (Default)
After Lyn abdicated rule of Caelin, Florina returned to Ilia. She remained shy, but this shyness has made her strong within.

Florina and Lyn
When her grandfather died, Lyn asked that Caelin be taken under Ostian protection. She set out for Sacae with her friend Florina. Though Florina returned to Ilia, their friendship lasted forever.

Florina and Hector
Hector succeeded his brother as the marquess of Ostia, but the pain of his brother’s death weighed heavily on him. His beloved Florina gave him comfort and helped him become an enlightened leader.

Florina's name almost certainly comes from the word 'flower'. 'Florina' is probably a combination of the name 'flora' and the diminutive suffix 'ina'.

The name may also come from geography; Florina is a prefecture in northwestern Greece, along the Macedonian border.

'Huey' is a nickname for 'Hugh,' a Germanic name which means 'heart, mind or spirit'.

"Huey" is also the nickname of the popular UH-1 Iroquois helicopter used by the U.S. military. 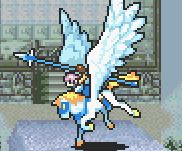 Florina as a Pegasus Knight 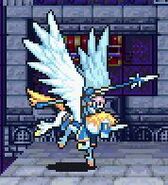