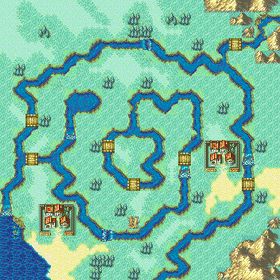 Gerik and Tethys (automatically from start)

Chapter script
[view]
“Ephraim leads the group to Za'albul Marsh in search of the missing Myrrh. They learn from soldiers and villagers that Myrrh had been captured by General Selena, one of Grado's commanders. She was last seen heading east. To regain their companion, the group will now be forced to fight. Ephraim steels his heart to the reality that he must face Selena.”
—Opening Narration

Fluorspar's Oath is Chapter 13 of Fire Emblem: The Sacred Stones when playing Ephraim's route. There are two villages in this chapter. The rivers will impede most of your units movements.

You start off in the northwestern corner of the map. Gerik and Tethys will also be allied. You can turn Gerik into either a Hero or Ranger now, but this is not recommended yet. Try to use a unit with high avoid (Speed or Luck, or both) or resistance, maybe both to use up Selena's Bolting before moving in. Bolting will always use up one use after every attack regardless if it hits or not, much like every other magic attack. Also, get to the villages as fast as you can, as the Bandits and Pirates will raze them quickly if you don't move fast enough.

A good way with powerful units is to separate them. Send fast moving units (Fliers, cavaliers, etc.) on all sides. The flying units can also be used to substitute them. The Bandits will come first at the south-eastern corner by the mountains. Use your fast moving units to intercept them before they destroy the village that holds a Talisman (The one in the middle-eastern portion of the map). The Pirates will then come at the south-western corner and will destroy the nearby town with the Barrier staff, so make sure your flying units (Or Berserker[s]) are well equipped with decent stats to kill them. While doing all this, many Pegasus Knight reinforcements appear from the southern part of the map and quickly charge you, so clear all those as well.

Once you use up Selena's Bolting, slowly move in towards the center and kill all enemy units. There is a Mage in the north-eastern part of the map, inside the first river, with a Speedwing, so steal that if you want it. Clear all enemies (Including Selena) to clear the chapter.

Completing the mission rewards you with: