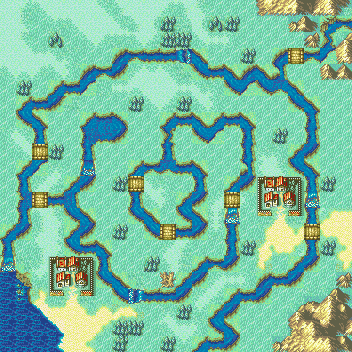 Gerik and Tethys (automatically from start)

Ephraim leads the group to Za'albul Marsh in search of the missing Myrrh. They learn from soldiers and villagers that Myrrh had been captured by General Selena, one of Grado's commanders. She was last seen heading east. To regain their companion, the group will now be forced to fight. Ephraim steels his heart to the reality that he must face Selena.

Fluorspar's Oath is Chapter 13 of Fire Emblem: The Sacred Stones when playing Ephraim's route. There are two villages in this chapter. The rivers will impede most of your units movements.

You start off in the northwestern corner of the map. Gerik and Tethys will also be allied. You can turn Gerik into either a Hero or Ranger now, but this is not recommended yet. Try to use a unit with high speed, resistance or both to waste Selena's Bolting before moving in. Try to also get to the villages as fast as you can, as the Bandits and Pirates will raze them quickly if you don't move fast enough.

A good way with powerful units is to seperate them. Send a fast moving unit on one side and the flying on the other. As the Bandits come first, use your fast moving units to intercept them before they destroy the village that holds a Talisman. The Pirates will then come and will raze the town with the Barrier staff, so make sure your flying units are well equipped with decent health to take them on.

Once you clean Selena's Bolting, move all your units in. Bolting will use a charge regardless if it misses or hits (which is a good thing). Move in quickly and kill all the units to complete the mission.

Completing the mission rewards you with: