Flux (ミィル Miru, lit. Mir) is a low-level Dark magic tome from the GBA Fire Emblem games, later reappearing in Fire Emblem Awakening. Known as "Creeping Darkness" in the GBA games, this spell will summon an orb of darkness that will creep up upon a selected enemy unit before impounding into them. This tome can be used by any wielder of Dark Magic, and is easily obtained at most stores in the games.

In accordance to the Trinity of Magic, Flux, much like all other Dark Magic tomes, is effective against Anima magic and not very effective against Light magic. Considered to be the most powerful of standard basic tomes, the might of Flux is roughly equivalent to that of Thunder Tomes. This in turn causes it to be more threatening than the basic Fire and Light tomes in spite of its lower accuracy. Despite being the most basic of Dark Magic tomes in the games, Flux possesses a D rank, as opposed to the E rank that Bronze weapons and other basic tomes are commonly tagged with.

"Flux" is a Latin word that means "flow", that which is reflected in the spell's animation itself, where creeping fingers of darkness are observed to traverse with fluidity beneath the surface before rising up out of the ground and striking the opponent. Mir, the spell's Japanese name, is most likely a shortened version of "Mistyrain".

Demonstration of a Shaman casting Flux in the GBA series. 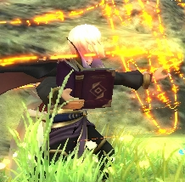 Henry wielding the tome of Flux in Awakening.

Henry casting Flux on an enemy Warrior in Awakening.

In-game model of the Flux tome from Heroes.