View source
“This is no good. If the fog thickens, we'll be blind in battle. It will be difficult to fight what we cannot see. ”
—Kent

Fog of War is a battlefield condition where vision is obscured, usually used for both nighttime and fog, or even sandstorms, as shown in Chapter 14 of Fire Emblem: The Binding Blade. It was introduced in Fire Emblem: Thracia 776.

Each unit has a vision range. In missions with Fog of War enabled, anything that falls beyond that vision range is obscured by the Fog of War and cannot be seen. You cannot attack units that are not within your vision range.

Using a torch will light up a large area centered on the user. The Torch staff functions similarly, though it can be centered on a spot that is not the wielder. Assassins, thieves and rogues can see much farther during fog of war. It is thus highly recommended to bring one along.

In Fire Emblem: Radiant Dawn, there are Watch Fires that let you see further in a certain range as long as it is burning. It is important to make sure that before you make any units move into obscured territory, the most appropriate weapon or tome is equipped, based on the circumstances, as if you walk into an obscured enemy, you're automatically forced to wait.

Fog of War is also present in the Fire Emblem Shadow Dragon WiFi battles, but not in the story mode.

Many players dislike the Fog of War, not because of the fog itself, but because the CPU is unaffected by it. The CPU has full vision of the entire map and can move to the players' position and attack on the same turn, while players have to sacrifice a unit's turn just to gain vision of the map, and cannot even attack should they know enemies are within the fog. This imbalance creates an advantage for the CPU that many players find unfair for a strategy game.

The ability to successfully navigate Fog of War is often called "scouting". Scouting is not often used in single player missions that contain Fog of War, since enemy units are not always affected by Fog of War. However, in WiFi battles (such as those in Shadow Dragon) both players are hindered equally by Fog, and as such scouting plays an extremely important role in determining the victor of WiFi battles.

There are several kinds of scouting tactics:

Also called poke scouting by some, this kind of scouting relies on the fact that running into a concealed enemy will stop movement and immediately set your unit to wait. Brute force scouting involves moving a unit into fog, then cancelling the movement command. The logic here is that, if your unit reaches the end of their movement path (without running into an enemy) then that entire movement path must be free of enemies. By process of elimination (brute force), it is possible to determine with 100% certainty if there is an enemy within your movement range. This is the most guaranteed form of scouting, but can have some shortcomings. For example, if the opponent is placed behind a doorway, scouting through the doorway will reveal the enemy, but the scout will be blocking the only square available to attack the enemy. This situation, often called a "choke point", is usually mitigated by using long-range units, like Snipers.

Warp scouting is a tactic that involves using the Warp. By warping a unit to the edge of your vision range, you can reveal a few extra squares of Fog, and retreat if the enemy is not in the formation you expect. This form of scouting is not often useful, as it consumes a staff user to initiate. Under a large number of situations, it would be more favourable to attack with the staff user, than to warp in the scout.

If you know the starting points of the enemy, it is possible to count their movement, and judge where the opponent is. For example, if you know the opponent starts 15 spaces away, and that the maximum movement in the game is 12, you can guess that the enemy will be no less than 3 spaces away. If the enemy uses warp, or some other technique to approach, they will not be able to attack because your units are too far away. However, on the next turn, you will be able to attack them, since they will be around 3 spaces away. 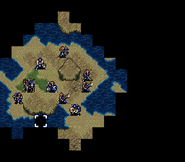 Fog of War in The Binding Blade.

Fog of War in Path of Radiance.

Fog of War in Radiant Dawn.