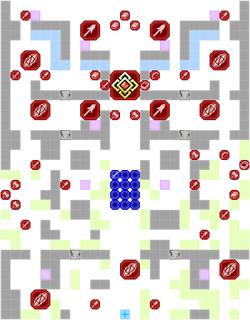 Chapter script
[view]
“The ambitions of those who slither in the dark are forever shattered with Shambhala's destruction. But in the process, Rhea is grievously injured. What fate awaits her, and who will bear the weigh of Fódlan on their shoulders?”
—Opening Narration

Following a Dream is the 21st and Final Chapter of the Silver Snow route of Fire Emblem: Three Houses. This chapter takes place in Garreg Mach Monastery.

As the Resistance forces escort Rhea back to Garreg Mach Monastery to recuperate from her injuries, Seteth confirms that she is The Immaculate One from ancient Fódlan lore and that he and Flayn are both children of the goddess. As Rhea is likely to succumb to her wounds and die soon, Seteth asks Byleth to step up and take charge of post-war Fódlan.

Before making their decision, Byleth pays a final visit to Jeralt's grave. Recalling his last words and his desire for Byleth to give their mother's ring to the one they love, Byleth can decide to propose to anyone they have an A-support with, gender permitting. Silver Snow is the only route in the game that allows for Rhea to become an S-support.

Afterwards, Byleth meets Seteth, Flayn, and Rhea outside Garreg Mach Monastery. Rhea reveals that Byleth is the ultimate product of her millennia-long efforts to revive her mother Sothis. She attempted multiple times to create a body and implant Sothis's Crest Stone within the body's heart in order to create a vessel for her resurrection. The twelfth such vessel fell in love with Jeralt and had a child, Byleth, with him, but Byleth was stillborn and their mother started dying from childbirth complications. Acting on the mother's request, Rhea transferred the Crest Stone to Byleth, saving their life. The combination of a mother born from Sothis's Crest Stone and a father who carried Seiros's blood finally created a suitable vessel for Sothis.

As Rhea finishes her explanation of Byleth's origins, she is suddenly overcome by the power of The Immaculate One, and driven into a berserk fury. Several Church soldiers report that the priests with whom Rhea shared her blood are turning into White Beasts, and Seteth realizes that in her current state, Rhea will raze Fódlan to the ground; their only option is to kill her.

The Resistance Army engages the berserk Rhea in a harrowing final battle, and finally defeat her. The wounded Rhea flies to the monastery cathedral, transforms back into her human form, and collapses into Byleth's arms. In the conclusion, she dies unless Byleth shares an A-support or higher with her, in which case Rhea will go on to live a secluded life in Zanado, The Red Canyon.

In the aftermath, Byleth begins the reconstruction effort as the new leader of the United Kingdom of Fódlan.

Note: These reinforcements are halted if a unit reaches the southern heal tile

This is it, your final battle. If you've been saving anything like stat boosters or relic weapons for a rainy day, it's time to take out your umbrella.

When the Immaculate One enters her second form, note that it is more like she is replaced by a stronger copy of itself; this means that any damage dealt to her first form or its barriers will not transfer over to her second form.

Challenging the Immaculate One can prove a very daunting task on this route. Not only does the player not have access to any of the three lords' powerful Hero's Relic combat arts, but the Immaculate One herself is immensely powerful, especially on Maddening. She boasts a colossal 640(126/126/189/199) total HP (N:363 H:469), backed up by solid defenses, Ancient Dragonskin, and strong Barriers. Moreover, dealing damage to her on enemy phase is impossible—in her second form, she will only use her Staggering Blow during her phase, and it is not possible to counterattack against one. Her Staggering Blow itself is rather threatening; it has a large area of effect, and the game will not telegraph who will be targeted by it unless a unit has drawn her attention with a gambit. The attack nullifies defense, so to survive it, a unit needs to have more than 28/35/46 HP. However, her Crest of Seiros can randomly raise this value by +5. If the player's units cannot reach such HP values, it may be useful to instead use a defensive gambit such as Blessing or Impregnable Wall to ensure that allied units survive.

Defeating all the White Beasts before challenging the Immaculate One is not strictly necessary to defeat her in a timely manner. The healing factor of her Divine Dragon Horn only activates at the start of enemy phase, so if a health bar can be completely depleted before the phase changes, she will not heal anything at all. Moreover, as it is a barrier ability, it will not be activated if she has no barriers present, meaning that if she at any point suffers an armor break, she will never be able to take advantage of it from that point on. As such, it may not be necessary for the player to split their army to take both sides of her, or to cycle all around her to clean up all the White Beasts. Instead, it can be simpler to just defeat the Golem and White Beasts on one side, then mount a careful but forceful assault after the side has been cleared.

The first order of business when attacking the Immaculate One should be to destroy as many barriers as possible to inflict an armor break quickly, so a few gambits with large areas-of-effect should be saved for her. Unfortunately, the Immaculate One has high charm, which can make it difficult to land them, especially on Maddening, where her charm is a staggering 53. To ensure that gambits hit, taking advantage of Gambit Boosts, as well as accuracy-boosting items and abilities such as the Accuracy Ring, Hit +20, or even something like Ferdinand's Confidence, is crucial. If the player has invested into Dorothea's Authority skill, then Rally Charm can also help reduce the disparity between the charm of the player's units and the Immaculate One. In regards to damage, Byleth's Sublime Heaven, as well as all other Relic combat arts, will still deal bonus damage against the Immaculate One, making them effective at cutting down her health. Sublime Heaven in particular is handy because the player will always have access to Byleth, and it boasts not only strong raw damage, but also a solid boost to their critical rate. Be careful when the Immaculate One is on her last health bar, however, as she is granted Vantage at that point. Once this ability kicks in, either make sure that your units can survive her attack, dodge it, or that you have sufficient means of ignoring her counterattacks entirely.