Fomortiis is a giant horned demon known as the Demon King and is the true main antagonist, as well as the final boss of Fire Emblem: The Sacred Stones.

In year 3, the Five Heroes trapped the Demon King's soul using the Sacred Stones. The stone of Grado (also known as the Fire Emblem) holds the soul of Fomortiis. Eight-hundred years later in year 803, Vigarde, the Emperor of Grado, dies and his son Lyon then tries to bring him back to life using the power of the Sacred Stones. Lyon succeeds, but in the process gets possessed by Fomortiis (Eirika's route) or has his darkest emotions and thoughts strengthened by the Demon King (Ephraim's route).

Regardless of the route the player picks, after Lyon's death, Fomortiis manages to resurrect himself. He fights Ephraim, Eirika and their allies, but is unable to withstand their assault. Defeated, the two seal his soul in Sacred Stone of Rausten before they destroy his body, to ensure that he will never be resurrected again.

Fomortiis doesn't take possession of Lyon's body, instead merely manipulating his darkest thoughts and emotions in order to make the prince himself work for his benefit. While Lyon acts on his own free will, he is unwittingly full of the emotions and fears chosen by Fomortiis to take over his mind.

Free of his prison, Fomortiis begins his reign of terror once more and invades Renais seeking to destroy its Sacred Stone using Vigarde and Lyon as his puppets. When he fails to locate the stone and the means to destroy it, he moves on to Frelia, where his generals Selena and Caellach easily overpower the Frelians and destroy their Sacred Stone.

Fomortiis then sends Caellach to Jehanna, where he kills Queen Ismaire and destroys the stone. Afterwards, both generals Caellach and Valter are slain by twins Eirika and Ephraim in Jehanna's desert. Angered, Fomortiis (still possessing Lyon) goes to stop the twins himself and destroy the stone they possess; he fails and retreats.

Fomortiis then tricks Eirika into handing him over the stone of Renais by posing as Lyon and the stone is destroyed. The twins venture to Rausten while Fomortiis travels to his temple in Darkling Woods to revive his body. Fomortiis then sends his last remaining general, Riev, to destroy the stone of Rausten and kill the Divine Emperor Mansel. Riev fails and retreats into Darkling Woods, where he is eventually slain and the twins gain entrance into the Black Temple of the Demon King.

Fomortiis is a highly ominous demonic being in control of Lyon. Depending on the route, glimpses of his grip on the young prince appear in, he has far less control over Lyon in Ephraim's route, choosing to manipulate his thoughts and only appearing as a last resort. In Eirika's route, he is far more direct in his control and has consumed Lyon's psyche.

Help Description: The Demon King, lord of darkness. His sole desire is to remake the world.

Fomortiis will be a doubtlessly difficult enemy, even if you trained all your units constantly with monster encounters. His Demon Light is extremely powerful and possess the range up to a Longbow. He also uses Ravager, which is an uppercut jab which can deal very high damage and can kill weakened targets. Both Demon Light and Ravager also provide Fomortiis with stat boosts which make it even harder to get high damage through.

Fomortiis also has access to Nightmare, which, despite having a hit chance of 70, will send every player unit in its range to Sleep for five turns without fail. Restore can work but considering that it hits multiple units if they are within range, Latona is the only way to counter it. In addition, Fomortiis can occasionally summon 8 monsters (Wights, Entombeds, Deathgoyles, Arch Mogalls, Gorgons, Elder Baels, Maelduins, Cyclops, Gwyllgis and Draco Zombies) to assist him in battle.

The easiest way to defeat Fomortiis, generally, is to simply rush him and attempt to kill him as quickly as possible. He will always spend his first turn on summoning, effectively giving you two turns of attacks on him if you can get your troops in range on the first turn (possibly through Warp, Rescue, or Tethys's dance). In particular, Eirika and Ephraim both start close enough to charge him on the first turn. While Fomortiis does hit very hard, he should not be in active danger of one-rounding your units if they have been trained, due to his Speed being one of his lower stats. Sacred Twin weapons deal fairly hefty damage to him, as does the Dragonstone and a Bishop with Aura. A Triangle Attack with Vidofnir or Audhulma can knock off a large chunk of his health, as can an activation of Pierce. Two full rounds of attacks from these various methods should be enough to put him down.

Unlike most other endgame bosses which are incapable of moving, Fomortiis can and will move to attack targets in his range. Players should be careful not to get a weak unit nearby or he will kill them quickly.

Demon King
Prince Lyon of Grado, having become a vessel for the Demon King Fomortiis's power. It is uncertain who directs his heart. Appears in Fire Emblem: The Sacred Stones.

Being possessed by the Demon King Fomortiis has granted Lyon an immense level of power for his Fallen form. He is more or less the same as his base form in terms of stats, having even higher Atk at neutral 40 without his tome and good mixed bulk, but at the cost of even less Spd. While his stats scream defensive bulky unit, there is more to him that makes him even more dangerous thanks to his tome and access to certain skills.,

His Blood Tome grants him an additional +3 Atk on top of the tomes base 14 Mt, thus granting him a neutral Atk of 53. Much like his base form, he is baiting mage with a focus on ranged units in general as the tome reduces the effect of Area of Effect specials by 80%, thus stifling mages like Ophelia or Lilina on top further reducing damage inflicted by ranged units by 50%. Finally, it has a Raventome effect, inflicting a color advantage over colorless units. He can easily take hits from Legendary Alm, Brave Veronica, Brave Lyn, and all armored archers with ease as they all deal significantly reduced damage. All-in-All, Fallen Lyon is the perfect end-all, do-all ranged unit counter in the game.

Sol gives him 50% of the damage he inflicts on his opponent back to him as health recovered. Bonus Doubler doubles the visible buffs he receives, making him even bulkier and hard hitting as a result. Null C-Disrupt shuts down problematic Dazzling Staff units like Bridal Fjorm and ranged Windsweep units from trying to poke him out. Rouse Attack Resistance grants him +6 Atk/Res at the start of his turn if he is not adjacent to an ally, thus he can be a frontline tank to bait out problematic ranged units and maintain his two strongest stats.

Though his bulk is solid on both fronts, his physical bulk is slightly lower. Unfortunately, most of his effect benefits come from combating ranged units, thus close quarters units negate a majority of the effects of his tome, leaving him with just his three passive as a result. Red sword units can easily dish out strong damage against him, especially since a majority of the sword units in the game have enough Spd to exploit his low neutral 16 Spd and double attack him.

Noontime is a slightly faster charging version of Sol with a slightly weaker effect. Nonetheless, it helps consistently keep his regeneration going strong. Reposition or Draw Back are solid positioning Support skills for him. Sturdy Stance maximizes his enemy turn power as it is where he is at his most powerful. Fortress Defense Resistance also works fantastically as his Atk is merely reduced to neutral 51, which is still quite powerful, on top of bringing both of his bulk stats to around 40, making him an imposing wall. Lull Attack Resistance further punishes enemies who try to attack him by negating their visible buffs to Atk/Res and inflicting -3 to their stats as well. Skill C is flexible enough to run Smoke skills like Attack Smoke, otherwise the skill slot is up to the player in terms of his synergy with the rest of his team.

Fomortiis is illustrated in the trading card game Fire Emblem Cipher with the following cards: 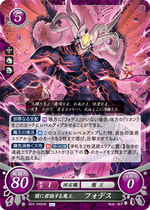 In Irish mythology, the Fomoiri or Fomorians were a group of sea demons comparable to the Titans of Greek myth. While they were normally terrible and vicious, Ethniu, daughter of Fomoiri leader Balor, married the hero Cian and bore him the son Lugh. His name may also be a wordplay, as his japanese name is "Fodeath" and mortiis is a variation of the latin word for death.

Fomortiis appearing next to Lyon in Fire Emblem 0 (Cipher).

Fomortiis as a Demon King in Fire Emblem 0 (Cipher).

Eirika and Ephraim using the Sacred Stone of Rausten to imprison Fomortiis's soul out of his body.

A very brief glimpse of Fomortiis as he appears at the end of the intro movie (where the fast cast roll is). He appears in a very quick flash before the Title Screen, like Idunn in The Binding Blade.

Fomortiis's portrait in The Sacred Stones.

A manifestation of Fomortiis as it appears as part of the Blood Tome animation in Heroes. 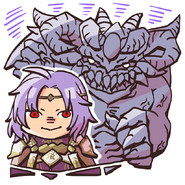