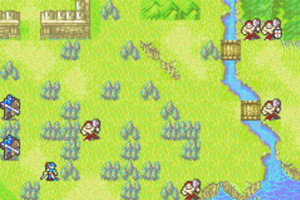 Chapter script
[view]
“The apprentice tactician --- and the young swordfighter Lyn. A strange pair on an even stranger journey. To prepare for the long road ahead, they go to Bulgar, the commercial center of Sacae. Unbeknownst to Lyn, she will discover something that will alter her life forever.”
—Opening Narration

Footsteps of Fate is Chapter 1 of Fire Emblem: The Blazing Blade.

In this chapter, Lyn meets Kent and Sain. However, she decides to avoid them when Sain attempts to flirt with her. As she leaves Bulgar, Lyn is approached by Zugu and his gang of thugs, but Kent and Sain come to help her.

In Normal Mode, the chapter forces the player to make Sain attack the nearest bandit, but is injured because he is using a lance against the Brigand's axe, and axes beat lances. Kent and Lyn can attack and kill the bandit by using their swords. In Hard Mode, this can be avoided.

In Normal Mode, Kent then gives Sain an Iron Sword to fight with. This scene helps to illustrate the Weapon Triangle (This scene is skipped in Hard Mode, leaving Sain at a disadvantage against bandits until the player can come across another sword). Sain moves to attack another bandit, but misses him because the bandit is hiding in the woods. The battle continues, and Kent and Sain kill the bandit hiding in the woods. Lyn gives Sain a Vulnerary to heal himself with, and the trio fight their way to Zugu and kill him. After all of Zugu's thugs are eliminated, the trio talks to each other about Sain and Kent's mission. Afterward, Kent and Sain become escorts to Lyn as she travels to Caelin.