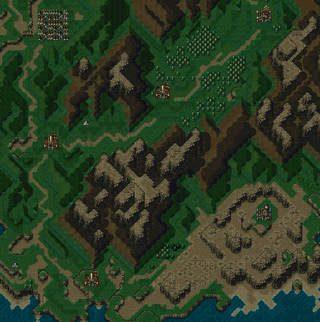 Chapter script
[view]
“With the liberation of the peninsula's north, Seliph's liberation army occupies Mease Castle as their headquarters, uncertain of how to next act. Beyond Mease and the engulfing maw of its peaks lies the Draco Knights' kingdom, Thracia. This rural nation is ruled by King Travant, who remains bound in coalition to Emperor Arvis. Thracia is the only state anywhere in Jugdral regarded as an ally by the Grannvale Empire. Within Thracia, Travant's minions await Seliph: his children, Altena and Arion, at the capital; the legendary General Hannibal, dubbed "Thracia's Shield", at Kapathogia Castle; the king's trusted advisor, General Disler, at Luthecia Castle; and a Loptrian agent from the Empire, Bishop Judah, at Grutia Castle. Travant has fortified his kingdom for one final, full-scale showdown with the liberators. Thracia's people hardly offer Seliph an eager welcome. Fearing Seliph as a conqueror, they flock in droves to take up arms themselves. How could any justice lie in this conflict? For whose sake is this war being fought? For the first time, these questions now shake both Seliph and his army's resolve to the core...”
—Opening Narration

For Whose Sake is Chapter 9 of Fire Emblem: Genealogy of the Holy War.

There are a couple things the player must know at turn one. If Finn is not alive at the start, Leif won't be able to talk to Altena and she won't be recruitable.

If Hermina is around, she should be sent to the village cluster and secure the +3 defense bonus immediately, then flee, as the mercenaries there are too strong for a pegasus knight. Alternatively, an attempt could be made to hit the thief with the Beserk Sword, as it will result in the thief being quickly killed by the mercenaries and spare the villages.

The first attack will come from Altena's squadron of dragon knights. The squad is equipped with Javelins, so it'll be enough to have Oifey or Ced/Hawk stand on the hills south of the home base to intercept them, however, Altena must be close enough so Leif can speak to her. She will fly back to the castle, whereupon Hannibal's squad will move towards the base and Travant's squad of dragon knights will appear and start flying towards said base simultaneously. Travant's squad must be interceped just as Altena's was (keep healers on hand), and either a Febail with Yewfelle or strong magic users will be good take out Travant. Once he dies, Altena will start flying back to the base, and when Seliph speaks to her she'll be recruited. Right after, she should be sent straight to the village cluster so she can annihilate the mercenaries/thief with the Gáe Bolg and get tons of gold.

At the same time, Hannibal must not be killed, as he is a recruitable character AND Coirpre/Charlot won't join in if he kicks it. If most of his squad dies, he will attempt to retreat to his castle to create another one. The squad is not to be laughed at, so it's best use some strong characters with cutters to take them out. Once most of his squad is dead, the player should move a paladin to his castle, kill the keeper, and stand in front of the entrance. This way Hannibal will simply stand next to the character, neither attacking nor being able to make it to the entrance. Seliph and a strong unit or two can capture the next castle down the path, which should not be difficult. Capturing this castle will recruit Coirpre/Charlot, who can then recruit Hannibal. It takes some effort to do this, but is definitely worth a very strong general and a (potentially) quite good healer.

Once the player moves a little ways past Luthecia, down the path, a squad of knights will arrive in the top left corner of the map led by Musar. It's time to use a unit or two and a hill defense bonus to take them out of they come. Musar drops a Tornado spell, and as such it is recommended to kill him with someone who can wield it. The two paladins are weaponless and will heal every turn, so the player can surround them and have their charas hit them without killing them to grind a bit of experience. They will heal every turn.

After this, the goal will be to take Grutia. Send your stronger mounted units like Ares and Oifey there to take out the numerous ballistae, but not Altena, since as a flying unit, she will easily die. The castle boss should die first, as his Fenrir poses far more of a threat to the paladins than the ballistae. Coirpre's and Lana's Physic staves will be good keep them alive if needed. Once Grutia is captured, the real challenge begins.

Upon Grutia's capture, Prince Arion will commit all his reserve forces for a last "three-headed dragon" attack, and FOUR squads of dragon knights will appear. One will fly towards the home base, another towards Hannibal's castle, a third one will fly towards Luthecia, and the last (headed by Arion himself) will remain to defend Thracia. Using Lana's Warp staff to send a unit or two to defend each castle is recommended. Make sure each castle is guarded by someone equipped with a Javelin, as all the squads use javelins. The strong characters should have no problem fending off and eventually killing these three squads when in guard-mode. Then send the warped units back to the main force and begin your final push to Thracia.

Be careful when engaging Arion's squad, as you definitely do not want any of their units getting hit by the Gungnir. A strong ranged combatant can take out Arion. Also, it'll be good to lure the main force of dragon knights with a strong unit that can weaken/kill them. This squad is only equipped with Slim Lances, and a couple of Sleep Swords.

After this, it's time to capture Thracia to claim victory.

The middle left village has a Barrier Ring, if you want it, better kill the ruffian.