Cavalier
[view]
“Oh, and... Well, in my case... Some of these dents are from me falling off my horse. Heh... Oh, and some come from falling asleep in my armor and rolling onto my weapons. Kind of a lot of them, actually. Heh...”
—Forde

Forde is a playable character in Fire Emblem: The Sacred Stones. He is the older brother of Franz, Kyle's best friend, and a cavalier in Ephraim and Eirika's service.

Forde is the older brother of Franz, and is a rather accomplished painter in his spare time. When Forde was young, he won a sword contest and his mother was happy, not for his contest, but for the painting he had made for her early that day. She kept it with her even when she died, it was only then that Forde took the painting back. He hung it in his house as a reminder of how he must continue to make people happy, not with his sword, but with his brush.

His father was a famous knight of Renais that was always traveling and so he was rarely at home, he was assassinated in the year of 793. His death, coupled with their mother's death some time prior when Forde and Franz were very young, resulted on Forde taking the parental role of raising his younger brother.

Forde, along with Kyle, Orson and prince Ephraim, is among the knights that were caught at Renvall. Posteriorly, the group of four succesfully conquered the fort of Grado, despite the slight possibilites of the plan to succed due to them being in minor number. This was considered a strategical feat, but they were forced to retreat when Valter incepted the fort with his way bigger army. They needed to leave Orson behind in the castle during their escape.

After their escape, Eirika arrives the capital and is tricked by Orson so they decide backtrack and help the princess in her invasion to the castle. Eventually the armies strategicaly split pursuing different tatics in the war, and so Forde either follows Ephraim's party, or is assigned by Ephraim to assist Eirika and her army in her journey.

Forde is an artistic and talented man. He is an expert painter, recording portraits of his friends and drawing scenes of the war. He also draws maps for the army, using the spatial reasoning skills he developed by painting.

His skill in arts and battle is only matched by his remarkable laziness; he tends to be the first to opt out of Ephraim's risky plans and is known to fall asleep in battle. However, Forde claims this is merely a plot to lure foes within range. He has gone so far as to equip his horse so that he can fall asleep in the saddle without falling over.

He is very optimistic, to the point of seeing out of touch sometimes. He finds enjoyment even in the battlefield, and tends to joke around the other members of the army to light the enviroment. He often banters with his best friend Kyle, the more level-headed one of the pair, who calls him out on how lazy he is.

*80% in the Japanese version

Forde is a cavalier that joins in chapter 5x alongside Ephraim, Kyle, and Orson, separate from Eirika's group. Of all the cavaliers, Forde has the highest skill, resistance, and luck and the most balanced speed, but suffers from having the lowest strength, HP, and Defense in the long term. As a result of his focus being on stats that are not very important for his class, he is often overshadowed by the far more specialized statistical abilities of Kyle's very high durability, constitution, and strength, and Franz's higher availability and better physical stats, especially in speed. Even in chapter 5x when they first join, because of Kyle's higher con, he will not have a higher attack speed unless he uses an incredibly weak iron sword in the lance focused chapter. Even in the long term, Kyle's speed will only be slightly worse because of his decent 40% speed growths against Forde's only acutely higher 45%.

He is often considered as such, the least impressive of the three cavaliers available. Despite that however, Forde is still an entirely capable unit that can hold up through the game proper. As a cavalier, he has very impressive movement and weapon triangle control and options for 1-2 range attacks. Even though his stats are much less impressive in how they are spread than Kyle or Franz's are, they are still good, and he has the highest growth total of them all, they are just spread out into the less important stats. Against the fairly weak enemies encountered throughout the game, he does not have a hard time competing and can contribute through either combat or through rescuing and ferrying with his horse and canto.

When Forde promotes, players have the option of changing him into either a paladin or a great knight. Turning into a great knight will give him slightly higher strength and speed by one point and will give him axe use, but will also take away a point of movement, leaving him with merely six despite facing heavier mounted terrain penalties. It also gives him higher con, which may let him use heavier weapons, but also ruins his rescuing utility for heavier units. As a paladin, he gains one less speed and strength and does not gain axes, but gains movement at eight overall. In the main game, the slight combat increase of great knight will almost never be a deciding factor in combat because of how incredibly minor they are, and the movement and con changes take away most of the utility the cavalier classes are known for. In the main game, it is generally recommend to leave him as a paladin because of this. However, if a player elects to play the postgame, where statsboosters of all kinds may be farmed, and where caps matter much more, Great Knight may be preferred.

“Ah, Prince Ephraim... It... It was fun while it lasted.”
—Forde's death quote
“We've got to do what we can, right?”
—Final Chapter Quote in The Sacred Stones

Forde, the Wild Knight (奔放の騎士 Honpō no kishi)
"Upon Forde's return to Renais, his secret hobby of painting was discovered. He was commissioned as a court artist. His work grew popular, and his days became so busy that he often regretted his career change."

A Support with Eirika
"After the war, Eirika and Forde returned to Renais. Eirika spent her days toiling in the reconstruction of Renais, and he was her faithful supporter. His portrait of Eirika captured the smile he had thought lost forever."

A Support with Kyle
"Sometimes, the greatest friends also differ greatly in personality. When Kyle and Forde returned home, they were celebrated in song and story. They lived their days in happiness, as dearest friends and toughest rivals."

A Support with Vanessa
"Forde's love for Vanessa grew after the war, and although she loved him as well, she placed her duty to Frelia first. Undaunted, Forde moved to Frelia himself. Over time, the two were wed."

Forde is illustrated in the trading card game Fire Emblem Cipher with the following cards: 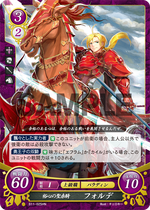 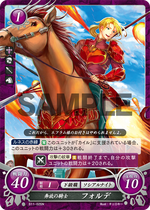 Ford has nordic or english origins. The english word means a shallow place where a river can easily be crossed, or 'forded'. It can also be an anglicized version of the surnames Fuarain, Mac Consnámha or Mac Giolla Naomh meaning "son of the swimming hound." and "son of the devotee of the saints" respectively.

Forde's portrait in The Sacred Stones.

Forde's attacking animation as a Cavalier.

Forde performing a critical hit as a Great Knight.