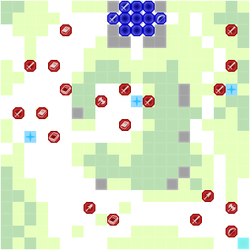 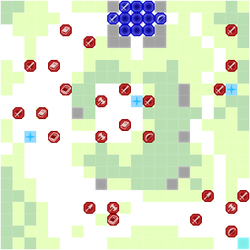 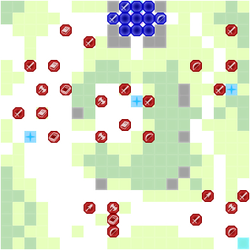 Rout enemy or get Petra to target destination

Byleth, Petra, Bernadetta and 8 others

Chapter script
[view]
“The war in Fodlan has put Brigid in a precarious position. With Bernadetta in tow, Petra returns to her homeland in hopes of avoiding a confrontation with her grandfather.”
—Opening Narration

Foreign Land and Sky is Bernadetta and Petra's Paralogue Chapter in Fire Emblem: Three Houses. This chapter takes place at Brigid, and is available on all routes after Chapter 14 during Part 2.

Available until 5/26 on Silver Snow

(if Bernadetta ends her turn near the east stronghold)

(if Bernadetta ends her turn near the east stronghold)

(if Petra captures the west stronghold)

At the beginning of the mission, Petra will note that allies are waiting at a stronghold indicated on the map. Bernadetta will suggest an alternate route to a second stronghold surrounded by dense forests. The forested stronghold is protected by a disorganized smattering of Swordmasters, while the main route is more open and is protected by a more balanced force of Fortress Knights, cavalry and casters.

Once a player unit is brought to one of the two strongholds, allied mercenaries will appear in the form of two Fortress Knights and a caster. Reinforcements can only be spawned once; after one of the two strongholds has been activated, the other will essentially serve no purpose, so splitting the player's forces to reach both is inadvisable. These allies will head in the general direction of enemy units, and though the forests will likely impede the slow Fortress Knights from making much headway, the placement of the enemy forces will eventually draw them towards the objective point.

This mission is somewhat deceptive. When any unit, including the allied mercenaries, gets close enough to the target destination, Hubert (or Catherine on the Crimson Flower route) will appear in the lower-left corner of the map, surrounding the player forces by bringing enemy Pegasus Knights and Paladins into play near both strongholds. Hubert is additionally accompanied by a pair of Snipers, and has access to a single casting of the spell Meteor. Catherine wields Thunderbrand, making her possibly more dangerous than Hubert, but only from melee range. At this point the mission objective changes, necessitating the total routing of the enemy force. Petra's former capture objective instead becomes a capture objective for each commander enemy unit.

The enemy reinforcements at the strongholds will also have Assassins, and the commander reinforcements will add Paladins. The Paladins have Blaze gambits and high charm, punishing strategies utilizing the dense forestry for cover. If the enemy commander is Hubert, he will be able to target most of the map and attack with an incredible 68 Mt with Meteor, capable of killing most units in a single hit, almost certainly including any of the four units (Byleth, Petra, Bernadetta, and the house leader) whose death results in failure. Even units with very high Rsl will likely lack the HP to survive Meteor. However, if none of your units is in range, Hubert will target one of the allied units spawned from the fort, if they are in range, essentially wasting his single use of Meteor Additionally, the player has only two turns to intercept the Assassin who spawns at the forest stronghold and will otherwise capture the objective. The Assassin's high movement is uninhibited by the forests, and the capture target will be swarmed with dangerous enemies. This all stands to make this paralogue among the most difficult chapters in the game, especially if Bernadetta and Petra have not been actively trained, and virtually requires prior knowledge of the reinforcements and/or trial and error via Divine Pulse. Having 'strike teams' poised to preempt the reinforcement units is key; eliminating Hubert before the enemy phase begins is necessary, as is having a sufficiently strong force near the capture objective to safely stop the Assassin.