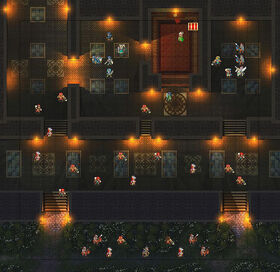 Chapter script
[view]
“Marth warns Chrom that Exalt Emmeryn will be assassinated. The plot is thwarted, but Marth is revealed to be a woman - and one with knowledge of the future.”
—Opening Narration

Foreseer (One who knows the Future in the Japanese version) is Chapter 6 of Fire Emblem Awakening. This chapter takes place in Ylisstol.

This chapter has two main objectives: Defeat all of the enemies and protect Emmeryn. The map has Chrom's army assisted by Marth, who is an NPC and cannot be recruited. There are also two characters that can be recruited in this chapter: Gaius and Panne. Out of all maps in the game, this is the first and one of the few defensive oriented maps.

Since Emmeryn is in the inner most room, doesn't move from her spot and there is only one opening into her room, she shouldn't need any guards standing directly next to her. While it is best to deal with all enemies as swiftly as possible, the numerous thieves need to be dispatched as soon as possible so they cannot pick the door which leads to her room, creating another opening for enemies to attack Emmeryn. Once Gaius has been recruited, avoid picking the door and only have him pick the chest. Marth remains in the same spot, and doesn't move - she generally doesn't need much support, and will heal herself with Parallel Falchion if her health drops too low. Unlike Emmeryn, Marth can "die" with no instant Game Over or future gameplay effects.

In recruiting Gaius, two options are available, either quickly send out Chrom with a mobile unite such as Sumia, Sully, or Frederick to move him close to Gaius and recruit him or lure Gaius by stepping just enough into his range to draw him close. Either have a unit who won't be able to kill him or unequip your units to prevent counter damage. Frederick and Kellam perform well for that task since his low strength means that he'll barely be able to put a dent on them. However both of these strategies will need to be executed quickly before the Dark Mages approach the western walls. Panne will arrive on the map, automatically join on Turn 2, and can be used right off the bat.

A majority of the primary enemy force is comprised of Dark Mages, Fighters, and Thieves. Most of the wall units should be units with high defenses and/or speed such as Stahl, Sully, Frederick, and Lon'qu. In addition, a Rescue staff charge can be used to move Marth to block the center passage. A few supporting indirect units such as Ricken, Miriel, and Virion work nicely for dealing with the Dark Mages. You may need to bring both Lissa and Maribelle on the map, especially on higher difficulties to keep everyone healthy, or optionally, have everyone with Vulneraries for quick relief in case they cannot get to them when they're low on health. Once a majority of the first wave has been killed, a secondary wave accompanied with Validar will begin to move. This second force throws in Cavaliers which could prove difficult for anyone who is not a mage, but should barely be a problem aside from their good movement range. Dealing with all of these grunts leaves the leader, Validar, left to deal with.

Validar is not a stationary boss and will move once a majority of his force has been wiped out. As the first promoted enemy boss encountered in the game, there will be some difference when dealing with him compared to past enemies. On Normal Mode, he actually won't have much difference when compared to previous enemies aside from some slight stat improvements. In Hard Mode, Validar comes with the Anathema skill, and in Lunatic, Vengeance, with a 26% chance to activate, accompanying Anathema. Since Validar is a magic user, a fast unit with workable resistance, like Sumia or Robin are effective counters, however Vengeance can be fatal if dealt with incorrectly and can lead to a death of a unit. Should Validar not be the last unit, the remaining grunts should not be anything too difficult to deal with.