Not to be confused with Forrest (Fates).

Forest (森) is a common form of Terrain found in the Fire Emblem series.

The Forest-spaces provide a +1 bonus to Defense and +20 bonus to Avoid, allowing the unit under cover to take less damage and have a greater chance to avoid enemy attacks. Like all terrains, the effects activate when both defending and attacking while standing on the space.

It is also noteworthy that entering or passing through a Forest requires two remaining move tiles (three for horse-based units), meaning the Terrain also reduces movement. This can be avoided most of the time however by going around forested areas.

Forest-spaces that exist in Fire Emblem: Path of Radiance or it's sequel Fire Emblem: Radiant Dawn are uncrossable, although those games featured the Thicket which is similar in effect to a normal forested space. 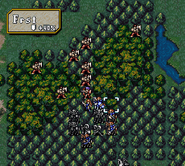 A Forest in Fire Emblem: Genealogy of the Holy War. 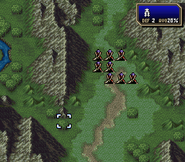 A Forest in Fire Emblem: Thracia 776.

A Forest in Fire Emblem: The Sacred Stones.
Add a photo to this gallery