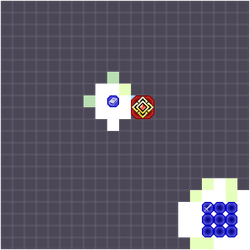 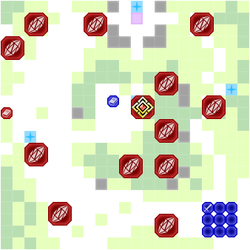 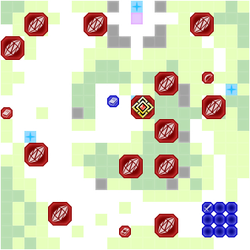 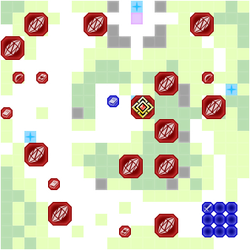 Byleth, Marianne and 8 others

Chapter script
[view]
“Maurice's Crest is a symbol of disaster. Anyone who comes in contact with it is met with great misfortune.”
—Marianne about the Crest of the Beast

Forgotten Hero is Marianne's Paralogue Chapter in Fire Emblem: Three Houses. This chapter takes place at forests outside of Garreg Mach Monastery, and is available on all routes after Chapter 14 during Part 2. This is a Fog of War chapter.

A Crest scholar confronts Marianne, convinced she is the true identity of a vicious monster called the Wandering Beast. Byleth comes to her defence and manages to ward the scholar off. Afterwards, Marianne opens up to her professor about the truth behind her Crest of The Beast. She states that those who bear the Crest are cursed with great misfortune and disaster and it is believed they too become violent beasts at night. In order to dispel these rumors, Byleth and Marianne decide to confront the Wandering Beast in the foggy woods. Before they leave, she only asks that Byleth not tell anyone else about her Crest.

After slaying the Wandering Beast, Byleth and Marianne receive Blutgang, which appeared in the remains of the dead monster. Seeing the sword was enough to convince the Crest scholar of Marianne's innocence and leaves her be.

This map is an absolute pain. The fact that there is Fog of War, combined with the fact that most enemy units on this map are Demonic Beasts, makes this a very dangerous level. The main objective of the level is the Wandering Beast in front of Marianne, who will not move unless provoked. Remember to use Divine Pulse if anything ever doesn't go your way.

Besides all of the Demonic Beasts, there's an enemy Mage unit straight west of the group's starting position, and an enemy Bishop with Physic on the far left of the map, on a healing tile. Once he runs out of Physic uses, he will start moving towards the structure to the north.

Since Marianne will most likely be one-shot by the surrounding Demonic Beasts, it is suggested to move her north into the woods, to the safe space surrounded by walls. As for your other units, keeping them together seems like the best option. Since the enemy units are not affected by the Fog of War, it is important that you do not move too far with 1 unit, who can become easily overwhelmed by the many Demonic Beasts out there. Going straight north into the woods from your starting position will have you run into less Demonic Beasts than if you were to follow the path to the west. Just be sure to stick to the eastern edge as to not aggro the Demonic Wolves in the woods. While 2 Demonic Beasts do spawn as reinforcements from the east, using your Gambits should stun them so your units can finish them off.

Once you get your units to the same safe space Marianne is at, you can relax, as the hard part of the map is over. Some of the enemy units should start moving towards that area, so have a few tanks bait them out so your other units can finish them off. As you recall, the Wandering Beast is in the clearing in the middle, so follow the path to the middle of the map, taking out the few remaining Demonic Beasts on the way there.

Using your remaining Gambits to stun the Wandering Beast followed by attacking him with the rest of your units should make quick work of him, as he's just like the other Demonic Beasts with breakable barriers. Once you kill him, the Paralogue ends.