Max Mittelman
[view]
“You know I'm not ashamed of the way I dress, Corrin. And I feel I should show that confidence and pride in public. The only way the world will grow more tolerant is to see people like me. ...See us living, loving, and being both our unique selves and quite ordinary. When we're not invisible, we can become part of the pattern—woven into the fabric.”
—Forrest in a support conversation with the female Corrin

Forrest is a playable character in Fire Emblem Fates.

Forrest is the son of Leo and the cousin of Siegbert, as well as one of the two grandsons of Garon. Like the other children of Fates, Forrest was placed in the Deeprealms to protect him from the war. During his time in his Deeprealm, Forrest developed an interest in fashion as well as a strong bond with his aunt, Elise. One day, Elise gave one of her old hand-me-down dresses to one of Forrest's caretakers. Forrest was so enamored by it, he decided to wear it and Leo called him cute in it. It was at this moment that Forrest began learning about fashion and learned how to sew over the years in his Deeprealm. Even though Forrest knew that boys did not wear skirts and dresses, he learned to make feminine clothing and continued to wear them.

In his Paralogue, Leo and Elise decide to pay a visit to his Deeprealm, however, Leo is less than eager to see him. Niles tells him that the town up ahead is being attacked by bandits, and that a "beautiful woman" is healing the wounded. Forrest greets his father, but Elise is left confused as his appearance makes her think that Leo had a second child. Forrest formally introduces himself to his aunt and she is left stunned by his exquisite fashion sense. Leo asks Forrest what he is doing outside of his Deeprealm, which he replies that he came to buy some materials to make clothing. Leo continues to disapprove of his son's fashion sense and his overall appearance. Fed up with his father, Forrest decides to leave for his Deeprealm, but stumbles into a few brigands attacking the town and is captured. Leo joins in the battle and rescues his son.

After the battle, Forrest vows to return back, but he does so not because of his father's command, but of his own volition. He even states that Leo is not worthy to be his father. Before he leaves, a villager comes to Forrest to thank him for healing them and his family. Handing Forrest a broach, Leo acknowledges that he was wrong to judge his son and that his statement about him not being worthy to be his father is true. Leo invites Forrest to join the army to spend more time with him and Forrest is ecstatic to spend time with Elise. Leo himself promises to show Forrest that he can be a father worthy of such a strong son.

Forrest is very polite and cordial with most people, even exhibiting some feminine traits. Despite his feminine appearance, Forrest has stated that he is not romantically attracted to men. Instead, his feminine appearance is due to a deep interest in fashion designing. Forrest has stated that the clothing he wears is of his own design. While he mainly focuses on designing dresses and other feminine clothing, he is perfectly capable of crafting masculine outfits, even creating a perfect hunting outfit for Kiragi in their support when he was taken on a hiking trip with him. He also is obsessed with cleanliness, refusing to dirty himself as much as possible, and adores cute animals such as rabbits.

Forrest's relationship with his father is soured originally due to Leo not approving of his son's interests. However, after Leo saw the error of his ways and became more accepting of his son's hobbies, their relationship improved significantly. Like the other sons of the royal princes, Forrest is destined one day to inherit Brynhildr. However, Forrest is not as eager as the others to inherit his weapon as he fears losing sight of himself when wielding the powerful tome. With reassurance from his father, Forrest believes that he will one day be worthy to inherit the tome, but not at the current point in time.

He has the most sympathetic ear in the army.

Forrest is the second Troubadour in Conquest. He will have some competition from Elise (as she is the first Troubadour), though depending on the player's current chapter, can quickly catch up with an Offspring Seal. Forrest's magic growth rate is equal to his father, though his other growths can vary based on whoever is his mother.

His personal skill, Fierce Counter, allows him to deal 2 extra damage if fighting against a male enemy. As they are common throughout the whole level, Forrest will often benefit from it.

Already coming with two Troubadour skills, Forrest can promote either to a Strategist or Butler. If he does not have an Offspring Seal, it is recommended to slide him into the Butler class first, so he can start using Flame Shurikens, as his Strength is too low and will not work well with the low might of hidden weaponry. His naturally high magic stat means that after learning the Butler's skills (Live to Serve and Tomebreaker, can quickly build up his tome rank for other classes. From the Strategist class, he can learn Rally Resistance and Inspiration to help support allies.

As Forrest's primary class is Troubadour, he will end up taking Leo's Dark Mage class set as his secondary. From the Dark Mage class, he can learn Malefic Aura to deal extra damage with magic and Heartseeker to reduce the avoid of nearby enemies. It's promotions entail the Sorcerer and Dark Knight classes. From the Sorcerer class, Forrest can learn Vengeance and Bowbreaker. From the Dark Knight class, he can learn Seal Magic to reduce the potency of enemy magic users and Lifetaker to restore any lost health. While having access to swords, it is still recommended to stick with tomes until his Strength is high enough.

Fashion Forward
Son of Leo. A kind and compassionate soul, with a keen eye for aesthetics. Loves to sew. Appears in Fire Emblem Fates.

Forrest is illustrated in the trading card game Fire Emblem Cipher with the following cards: 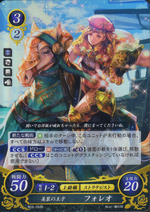 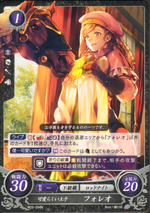 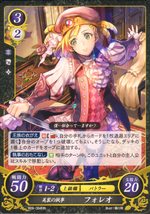 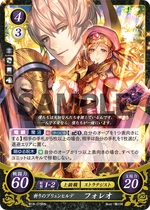 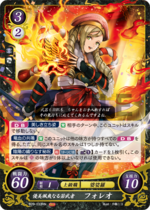 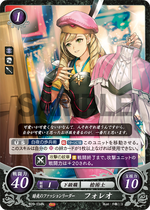