Forseti (フォルセティ Foruseti) is a holy Wind tome from Fire Emblem: Genealogy of the Holy War, Fire Emblem: Thracia 776 and Fire Emblem Awakening. This tome was once wielded by Ced the Crusader, bestowed upon him by the divine dragon Forseti during the Miracle of Darna. The tome of Forseti is the property of Ced's descendants, who are the royalty of Silesse.

In Genealogy of the Holy War, this tome grants its wielder bonuses of +10 Skill and +20 Speed, and may only be wielded by users possessing major Forseti Blood.

In Awakening, it grants a bonus of +5 Speed, and can be wielded by any spellcaster with sufficient Tome skill.

During the events of Genealogy of the Holy War, the Forseti tome first appears after Sigurd's troops reclaim Silesse Castle from Daccar's grip in Chapter 4. Lewyn, worrying for his mother's safety, enters the castle to reunite with her. There, evidently moved by Lewyn's display of maturity, Queen Rahna decides to entrust the tome of Forseti into his possession, urging him to use its power for peace.

The events of the Battle of Belhalla that occur in Chapter 5 see Lewyn perishing, only to be resurrected by the spirit of the Wind Crusader Forseti residing within the tome. The tome is then inherited by Lewyn's son, while the soul of Forseti continues to inhabit Lewyn's body throughout the events of the second generation.

During the events of Thracia 776, the Forseti tome is the weapon of choice wielded by Ced, who directs its powers towards commanding the Magi Squad, a rebel group motivated by a desire to purge the Loptyr Sect's influence from Manster.

Forseti is the god of justice and reconciliation in Old Norse mythology. Forseti is also an Icelandic and Faroese word that means "president" or "the presiding one".

The Forseti tome, as it appears in the third series of the TCG.

Forseti as it appears in Fire Emblem Heroes.

Ced casting Forseti on Julius in Genealogy of the Holy War.

Map animation of Lewyn casting Forseti on an enemy General in Genealogy of the Holy War.

Animation of Ced casting Forseti on Alfan in Thracia 776. 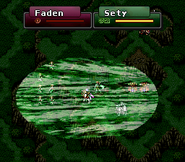 Forseti cast on the map in Thracia 776. 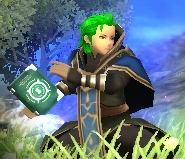 Lewyn wielding the tome of Forseti in Awakening.

Lewyn casting Forseti on an enemy Valkyrie in Awakening.