Chris Cason
[view]
“You won’t catch me running home to be some bookworm like my sire. I’ve made a name for myself as a warrior. May as well take that to its logical conclusion and do some more warring.”
—Forsyth

Forsyth is a character from Fire Emblem Gaiden and its remake, Fire Emblem Echoes: Shadows of Valentia. He works directly under Clive in the Deliverance, and is Python's childhood friend.

Born into a scholarly family with his father having made a name for himself, Forsyth initially thought in following his father's footsteps, growing up while studying diligently. However, he later decided to follow the path of a knight by joining a local lord’s army with aspirations to become a knight and, after one thing led to another, he volunteered for the Deliverance, eventually leading Python into joining the army as well.

After the war, he joined the knighthood of the newly formed Kingdom of Valentia, having learned how to relax and assisted Clive as a capable and thoughtful lieutenant.

Forsyth is a straightforward, passionate man with great devotion to Zofia and the Deliverance. Despite commoners' lack of social mobility, Forsyth has great dreams of becoming a knight. He speaks rather formally for someone of his background, particularly when around his superiors. He admires Clive, and is grateful to him for giving him a chance to serve as an officer in the Deliverance.

He is less overly formal when around his friends, though still quite intense. He often chides his childhood friend Python for his apathy and laziness, wishing he would work harder and not fully understanding his lack of a dream. Despite this, he cares for him deeply, and the two of them are reliable comrades on and off the battlefield.

He sometimes seems to have some difficulty with social norms, as evidenced in his supports with Clive when he attempts to follow his suggestions to "loosen up" and "treat him more like Python" to disastrous misinterpretations.

He is not naive, despite his lofty goals and occasional outlandish actions. He mentions multiple times that he is aware his dream of becoming a knight is unlikely, but he still persists anyway. His passion sometimes runs away with itself, but he is a forthright, determined man who cares deeply for his friends and country.

Forsyth and Clive can be found at the end of the Deliverance Hideout. Defeat the undead monsters within, and talk to them both to have them join your party.

Forsyth is an average unit. No matter which Soldier/Armor/Baron unit you choose to use in Gaiden, they will wind up very similar. The Armor characters in Gaiden are more heavily impacted by their Promotions and strict class role as a defensive tank than they are by their stats or stat growth, as they will all have high Strength and Defense with low Speed.

Forsyth is in direct competition with Lukas, as they are both Soldiers that you obtain early in Chapter 1 of Alm's route. When picking between the two, Forsyth comes with some notable advantages. He starts with higher HP, and will likely retain that HP advantage. He will also end up with more Speed and Resistance than the other Armors, and he ends up with much higher Strength than Lukas or Valbar. Although Forsyth has bad Defense growth, all Armor units in Gaiden have similarly low Defense growth and enough base Defense to make Physical attacks do negligible damage anyways. His low skill can be a problem, especially on terrain-heavy maps. All in all, Forsyth is not a great unit, because his low base stats and joining at the end of act 1 as a first tier soldier mean that he has quite a bit of catching up to do if he ever wants to compare to the likes of Lukas.

* DLC class; access with the Altar of the Titan.

Forsyth is a soldier that Alm will recruit at the end of the Deliverance Headquarters after speaking with Clive. For his join time, he joins quite underleveled, still only as his first tier class as a level 4 soldier, while most members of Alm's party should be either ready to promote into their second tier class or very close in level to promoting into their second tier class - especially Lukas, who can easily have gained enough experience to promote out of soldier before Forsyth is even recruited. Compared to Lukas, Forsyth has generally superior stats in the long term, with higher speed and a higher resistance stat that makes him less endangered by magical enemies. While his performance is superior to Lukas long term provided investment, he is still dealing with many of the weaknesses that Lukas has, including his lack of mobility and extremely low speed base, and he lacks the contributions early game where Lukas was more uniquely valuable to the team.

Overall, Forsyth joins quite underleveled and must promote quickly into knight in order to remain relevant. He generally surpasses Lukas on the role of knight in the long term of the game, though he still deals with all of the weaknesses inherent in his classline. Despite this, both Forsyth and Lukas are viable and capable of being used throughout the game.

Loyal Lieutenant
A soldier with the Deliverance. Advisor to Clive, whom he has sworn an ardent allegiance to. Appears in Fire Emblem Echoes: Shadows of Valentia.

(If both Clive and Python are alive)
Forsyth joined the One Kingdom's knights after the war, working hard to bring order back to the land. Time took off some of his more caustic edges, and he served many years alongside Clive as a poised and thoughtful lieutenant.

(If Clive dies)
Forsyth joined the One Kingdom's knights after the war, and he lived his life for them as the late Clive would have wanted. Time took off some of Forsyth's more caustic edges, giving him a poised and thoughtful demeanor that reminded many of his old commander.

(If Python dies)
Forsyth joined the One Kingdom's knights after the war. The loss of Python left him empty, which is perhaps why he volunteered to go to the borderlands to bring the king's peace. He met and wed a woman from the area, and the two never returned to the capital.

Forsyth is illustrated in the trading card game with the following cards: 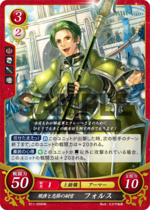 The name Forsyth dates back to before the twelfth century. The name is probably of Celtic origin, in which case it may be derived from the word "fearsithe", which is Gaelic for "man of peace"