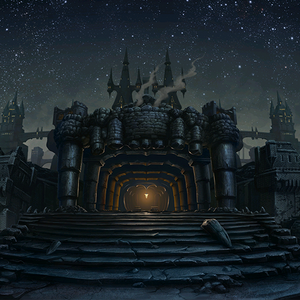 Fort Dragonfall is a fortress located in Nohr in Fire Emblem Fates.

Prior to the events of Fates, an elder dragon died in this location. Thousands of years later, an architect decided to construct a fortress here utilizing the dragon's bones.

The fort was then used by Nohrian soldiers, although it was seemingly abandoned after an unknown period of time.

Fort Dragonfall makes its first appearance during Chapter 20, where the Hoshidan army decides to go through to reach Windmire faster and hide from Nohrian forces searching for them. The fortress' condition in this path is far worse than in Conquest, as the throne seems to be missing in this path.

Ryoma notes that the fortress is unusually empty like all the other places in Nohr they visited, and suspects that it may be a trap. Iago teleports inside the fortress, still observing Avatar's progress through Nohr. He collapses the entrance they entered through and tells them that Garon gave him new magic powers to use on them. Iago uses his powers to revive the dragon, which results in the fortress' walls becoming much more stronger. Stomach acid begins to form inside the dragon, and Iago summons a horde of Faceless to kill them quicker.

After the Faceless' leader is killed, Azura sings to undo Iago's spell, which allows the Hoshidans to break out of the walls and escape.

Fort Dragonfall makes its first appearance in this route during Chapter 9. The fort's condition is significantly better.

Corrin, having been tasked by Garon to capture Notre Sagesse for Nohr, passes through with their small army. They find a group of Hoshidans occupying the fort, and prepare to battle them. The Hoshidans, led by Haitaka, battle the Nohrians but are ultimately defeated. In the process, Corrin recruits Nyx, who had escaped the Hoshidans after they put her in protective custody due to confusing her as a child, and also finds Azura, who had left Hoshido after Mikoto's death but was captured by the Hoshidan garrison.