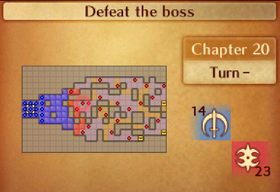 Chapter script
[view]
“After the Rainbow Sage imbues the Yato with additional power, the group makes their way toward the capital of Nohr. It won't be easy to reach their destination.”
—Opening Narration

Upon start of this chapter, if you placed units in the front five tiles, they will be hurt by the stomach acid of the dragon. This acid can be dispelled by using the Dragon Vein, stopping the damage and preventing reinforcements from coming. If your units are strong enough, you won't need to take every unit. The only enemies in this chapter are Faceless, so Blessed weaponry should help dispatch of them faster.

While traversing through the fortress, bring your royal units along and have them use the Dragon Vein. This removes the stomach acid permanently and prevents Faceless from spawning in them. Bring a unit or two with Lockpick as well, so they can pilfer the three chests at the other side of the map, as none of the Faceless drop any chest keys. Occasionally, a Faceless will spawn with Movement +1 and Locktouch; these can be used to open the chests, but they must be dealt with quickly before they escape with the items, as you will miss out on the first pair of Boots in Birthright (excluding BP/VP rewards) if it escapes the map.

The generic Faceless carry a wide variety of skills, although their poor stats prevent them from making most use of them. The boss carries five different weaponbreaker skills: Swordbreaker, Tomebreaker, Lancebreaker, Axebreaker and Bowbreaker. This means Shuriken weaponry can bypass the weaponbreaker line, although any weapon will work just as well because of the poor speed stat of the Faceless.

The infinite reinforcements in this level make it a very good chapter to gain Weapon Experience, as although your units may be high enough to barely get any level experience off them, they can train on the Faceless to increase their Weapon Rank for the later chapters. This level is also great for the player's weaker units who should be able to easily fend off the Faceless without needing a rally unit to help them. The player should still be careful for any Faceless with Pass incase the unit(s) brought along are not strong enough.

After a while, the boss will start moving. You will want to bring a unit that has at least 29 defense, to negate the boss' damage. This can be easily done if you have an Einherjar or prisoner unit (from previous playthroughs); just make sure they don't have any weapon equipped so that the boss does not suicide on them and end the level prematurely.