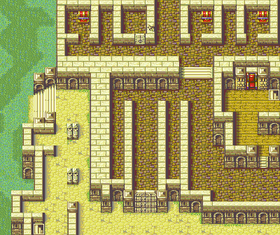 Tana (from start), Amelia (talk to with Ephraim or Franz)

Chapter script
[view]
“Ephraim begins his march south toward Grado from Castle Frelia. Upon conquering Renais, the Grado Empire has set its sights on Frelia. However, Innes and his troops meet the invaders at the waters’ edge. Against all odds, Innes halts the invasion, keeping Frelia's border intact. Ephraim coordinates Frelia's troops in an effort to advance the front lines. Unbeknownst to Ephraim, Grado forces are waiting for them at Fort Rigwald. They've fortified their positions and plan to wait out Frelia's siege. Undaunted, Ephraim remains determined to root out Grado.”
—Opening Narration

NOTE: If your units are of a low level, the Tower of Valni has appeared. Use it for training.

The game starts with you on the entrance to the fort. Tana is locked in a room inside. You can move her around, but she will not be able to get out until you get to her.  Watch for the mage near her, as the mage will constantly attack her until she dies, so move her around when needed.  If you keep her in the space she starts in, the mage will not attack.

Move your units toward the door, killing any enemies in your path. However, watch for the 2 Priests who will attempt to use their Sleep staves (which has about 4-5 tiles in range) on your units. There are two soliders in front of the door. The left one will charge at you when you get into his attack range, but the right one will stay put regardless. Kill the right one to get a door key.

The hallway after the door is heavily guarded, but you will want to at least move Ephraim or Franz near the fort door because they are the only ones who can recruit Amelia. After a turn or two after you open the door, Amelia will move towards your units, attacking them if they are close enough. However, she only has 4 Move, so after she moves once she will most likely be in front of your units. Move Ephraim or Franz up to recruit Amelia (If you want to). If you do recruit Amelia, use Seth (Or any of your three cavaliers, or Vanessa) to rescue and carry her away from the archers behind the walls. Then kill all the enemies in the passage, though the archer to the right carries a Red Gem, so steal that if you brought Colm.

Get to Tana with a fast unit, though watch for the other Priest with the Sleep (staff). Also kill any enemies that are around her room. You can either open the door, or just destroy the broken wall in her room. If you have not already, loot the three chests, though watch for reinforcements. The chest to the upper right contains an Ocean Seal, so if you made Ross a Pirate you will be able to promote him into either a Berserker or Warrior. If you made Ross a Fighter though, then the only candidate for the Ocean Seal is Colm, and when he uses it he will be able to promote into either an Assassin or Rogue.

Then, get your units ready and proceed south, again killing every enemy. After that, Gheb is the only one still standing. He has no bow, which makes him especially prone to Bows, Magic Attacks and long-ranged melee weapons. He does have a Steel and Killer axe though, which is quite deadly at the latter. When he is dead, you will get one of his axes (The one that is not equipped by him), and seize his throne to complete the mission.