Four-Fanged Offense is Chapter 23 in Eliwood's story (24 in Hector's) in Fire Emblem: The Blazing Blade.

Depending upon which boss you fight, the map will be different.

Both maps have an arena. Use it to train your units, since it will be the last arena you can access (apart from 29x(E)/31x(H), where you only have 5 turns to use it). Both maps also have 2 armories and 2 vendors. In this chapter, you can either recruit Geitz (Linus' version) or Wallace (Lloyd's version). For Lloyd's version, there is a Fog of War. In both routes, one of the villages gives you an Earth Seal, which can be used to promote almost any character (except Pirates, Thieves, and Lords), and the other village gives you a Silence Staff.

Armory 2 (closest to the arena) 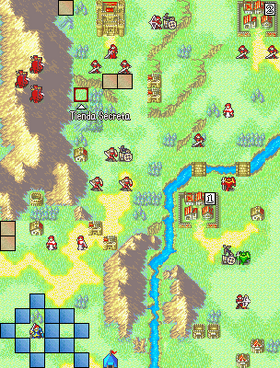