Prologue: The Fall of Renais (joins in Chapter 1: Escape!)

Cavalier
[view]
“Fine. I may be young, but I'm every bit a Knight of Renais. I'll fight to the end to protect the princess, just like you, sir!”
—Franz talking to Seth in a support conversation.

Franz is a playable character in Fire Emblem: The Sacred Stones. He is an earnest, sincere, and determined young cavalier from Renais. He is the younger brother of Forde, and seeks to emulate his father, a great knight who died in Renais' service. His mother died of poor health, but according to Forde, Franz was too young to remember. He greatly admires Seth and can develop a fraternal bond with Natasha. He is also able to fall in love with Amelia. He enjoys fishing.

His loyalty to Eirika and Ephraim is surpassed only by that of Seth, and he strives to live up to his brother, Forde's example.

Description: An earnest and compassionate cavalier from Renais.

*21 in the Japanese version

**8 in the Japanese version

Thanks to his high availability and well balanced stats, Franz is a very versatile unit and one of most reliable playable units in the game. He has good bases for his level and well rounded growths, with especially high speed compared to most other cavaliers. This, combined with his general ease of use and his availability that is only beaten by Seth and Eirika, make him one of the best overall units in the game for both combat and mounted utility. He is likely the best choice for the first Knight Crest, and is best promoted at anytime around level 15 or higher.

Many pass up Franz to use Seth, who shares a class with Franz. However, both units are effective, and the Paladin class is one of the best in the game. While Seth has some of the best stats in the game, he can't be everywhere at once. They can even support each other to become even better.

Like all cavaliers, Franz may choose to promote to either Great Knight or Paladin. As a Great Knight, Franz gains one more point in Speed and Strength, and gains axe access, but loses a point of movement. As a Paladin, he only gains one point in Speed and Strength and does not gain axe access, but he gains an extra point in movement. Because the minor difference in stats are irrelevant, and because he already has weapon triangle control, it is a better choice to promote him into a Paladin than to have him lose valuable movement for such minor combat improvements. However, in the post game where caps matter more and movement and stat boosters can be farmed, Great Knight is superior.

“There must be something that I can do!”
—Final Chapter Quote in The Sacred Stones

Franz the Faithful (誠実なら騎士, The Faithful Knight)
"He continued to serve Renais with the same devotion that he had during the War of the Stones. His generous nature and easy smile made him a favourite among the people."

A Support with Amelia
"Franz brought Amelia home with him in Renais. Amelia spent a short time with him in Renais's army, but once she and Franz were married, she retired her commission. The two had a daughter who grew to be a great knight herself."

Franz is illustrated in the trading card game Fire Emblem Cipher with the following cards: 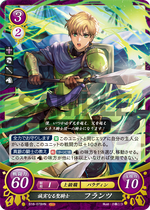 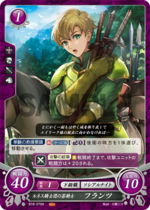 A German name which several of its rulers have borne, Franz comes from 'Francis' meaning 'Frenchman.'

Franz as a Paladin in Fire Emblem 0 (Cipher).

Franz as a Cavalier in Fire Emblem 0 (Cipher).

Franz's portrait in The Sacred Stones

Franz as a Cavalier performing a critical hit with a lance.

Franz as a Great Knight performing a critical hit with an axe.