“No way! My big sisters treat me the same way. They're out fighting in the war, but they told me to just stay and watch the house. They always look down on me like that!”
—Frau, in a conversation with Sun

Frau (フラウ Furau) is a playable character from TearRing Saga: Utna Heroes Saga. She is a fifteen-year-old pegasus knight in service to Salia. She is also the third daughter of Roberto and Clarice, making her younger than Verna and Mahter. Although both of her sisters consider her to be a child, she finds Mahter to be scary and does not regard Verna in the same way.

During the game's events, Frau travels to Blood and convinces her uncle, Lionheart, to allow her to assist him. Eventually, she meets Sun, who shares her desire to prove herself as an adult. The two of them quickly become friends and agree to work together to help Lionheart. When Holmes arrives in Blood, she and Sun mistake him for an enemy and engage his army in a battle. If Mahter was sent with Holmes's army after the first route split, she can reveal the truth to Frau and recruit her. Afterwards, Frau can talk to Sun and clear up their misunderstanding regarding Holmes's intentions. Some time later, she is ordered by Mahter to look out for Katri for reasons unknown to her.

In the ending, Frau reveals her belief that she is more childish than Sun, despite being the same age as her. Before separating, the two of them make a promise to always be best friends. Afterwards, she returns to Salia with her older sisters.

She appears as an enemy unit in Map 15. To recruit her, either have Mahter speak to her or keep her alive.

Frau is the fourth potential Dragon Knight who can be recruited and is definitely a decent unit to use. She may be a bit difficult to use at base level, but can easily be leveled up due to monster battles being fairly a easy way for her to gain experience. Statistically, she is more balanced than Mahter and has higher base stats than her despite being 2 levels lower. She also trading in some Luck for better HP, Magic, Skill and Speed and magic as well. Frau will hit fairly hard and will easily fly circles around most foes. As a Pegasus Knight, Frau possesses a fairly high Magic stat, for a physical unit, allowing her to fight mages capably enough before promoting. Frau is a very rewarding character to use and is worth the time to train up.

Frau is the German word for "woman". 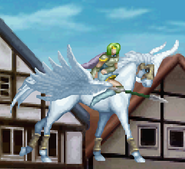 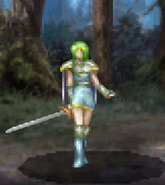 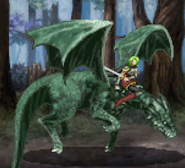 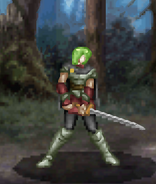