Paladin
[view]
“...I met Prince Leif, albeit briefly. Just from what little I saw, his values are far more in line with ours than the Empire's are. Whatever it is you've lost sight of, Lady Olwen, we can find it again in his army!”
—Fred in Thracia 776

Fred is a playable character from Fire Emblem: Thracia 776. A 25-year-old knight from House Friege's Schutaeze family, he serves as Olwen's deputy.

Fred first appears in Chapter 10, where he accompanies Olwen to Noel Canyon, rendezvousing with Largo to carry out surveillance duties. When Noel Canyon comes under attack by Leif's army, Fred and Olwen briefly remain to assist Largo with fending it off. They eventually leave to request reinforcements from Kempf.

However, Kempf provokes Olwen into attacking him in Chapter 11, later taking her as a hostage against Fred, forcing him to fight against Leif's army. Kempf activates Plan Portcullis midway through the battle, and Fred is quick to lambast it as "dirty tactics". He then joins up with Leif, working together with him to escape, thereafter promising to meet the prince again.

Kempf eventually escapes from Dandrum Fortress, leaving Fred to enter the dungeon to rescue Olwen in Chapter 11x. When the pair reunite, Olwen, who had been imprisoned with some children and learnt of the Empire's Child Hunts from them, is in a state of shock, not knowing what to do from this point onwards. Fred eventually brings her to her senses, convincing her to defect from the Empire and join Leif's army.

Fred then goes on to continue supporting Leif in his cause to liberate Northern Thracia from the Grannvale Empire. He returns to Friege thereafter, contributing significantly to its reconstruction. Fred then marries Olwen, but is often teased due to being older than she is.

Fred is portrayed as a deeply loyal person by nature. This can be seen when Kempf takes Olwen hostage, forcing him to fight against Leif's army. Although reluctant to do so, Fred takes up arms to fight Leif's army despite knowing that Leif is not evil, fearing that his defiance will cost Olwen her life.

This same loyalty also shows that Fred is a self-sacrificial person, willing to make personal sacrifices for the people whom he loves and cares for. Although not explicitly stated, his actions in Chapters 11 and 11x are motivated not just by loyalty, but also his feelings for Olwen, as he casts aside his ideals as a knight and puts his life at risk for her sake.

Fred is also an honourable person, and this surfaces after Kempf activates Plan Portcullis in Chapter 11. Here, he is quick to lambast the plan as "dirty tactics", expressing the desire to die as an honourable knight over being caught in such a detestable plan.

Fred is a decent unit with high Strength and Build growths. With the exception of Luck, all his other stats are robust. If you wish to use him, it might be a good idea to give him the Ced Scroll. Another boon is if you are using Olwen at the same time, as he gets a support bonus from her.

"After the war, Fred returned home to the Dukedom of Friege. There, he spent all of his strength helping the new, young lord rebuild the war-torn land. He went on to marry a young noblewoman with close ties to House Friege's inner circle, though the difference in their age made him the butt of many jokes."

Fred is illustrated in the trading card game Fire Emblem Cipher with the following cards: 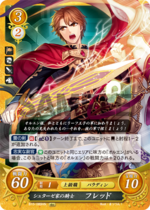 Artwork of Fred in Fire Emblem 0 (Cipher) by Mattsun!.

Fred, as he appears in the TCG.

Fred as a Paladin in Fire Emblem 0 (Cipher).