Lieutenant of the Shepherds
Retainer of Emmeryn, Chrom, and Lissa.

Prologue: The Verge of History (Awakening)

Kyle Hebert
[view]
“I have every wish to trust you, stranger, but my station mandates otherwise.”
—Frederick to Robin in the Prologue

Frederick is a playable character from Fire Emblem Awakening.

Frederick is a veteran who prefers to guide others, and is Chrom's deputy in the Shepherds, once serving as a royal knight beforehand.

Frederick is first introduced in the Prologue when Chrom and Lissa find Robin unconscious. He is a bit skeptical of their amnesia, but he eventually trusts Chrom's judgement in trusting Robin. Frederick accompanies Chrom throughout his journey in Ylisse to stop the Ylisse-Plegia war. When Emmeryn is nearly assassinated, he advises her to leave the capital for a short while. While they do so, Ylisstol is attacked by Gangrel, prompting Emmeryn to return to the capital to parley with Gangrel. Emmeryn orders Frederick to stay with Chrom, which he humbly accepts. After Emmeryn's sacrifice, he feels that he's failed his duty as a Knight of Ylisse, but he recovers and vows to continue to serve and protect Chrom and Lissa.

After the war, regardless if he's married or not, Frederick becomes the newest knight captain for Ylisse and devotes his time to keep the peace in Ylisse and train new recruits.

Frederick appears in the Fates Xenologue, Before Awakening, along with Chrom and Lissa. He is patrolling a stretch of land (The Northroad) with them when Corrin suddenly appears from nowhere, causing him to become suspicious of Corrin. Suddenly, invisible soldiers that Corrin was chasing at the start of the Xenologue attack, prompting the group to focus on them. During the battle, he notes that their attackers are invisible, but he is still able to sense their presence and fights to protect his lord.

At the conclusion of the battle, after Chrom gives Corrin two treasures of Ylisse, Frederick gives them a Pebble to help them with their journey. They later find the unconscious Robin, beginning the events of that game.

Extremely serious and with a no-nonsense personality, all while being in charge with protecting the royal family, it is no surprise that Frederick is a natural skeptic, a fact very aptly encapsulated by the nickname "Frederick the Wary" given to him by Chrom. He is also known to be very patient, dealing with Lissa's antics and Chrom's reckless behavior without displaying any visible signs of resentment. Despite this, it is clear that Frederick deeply cares for Chrom, Lissa, and Emmeryn, feeling the need to protect and serve them at all costs.

The services that Frederick renders to his lieges range from the standard to the absurd. To this end, he is not just known for preparing his lieges' clothes, but also clearing the road ahead of them of rocks and sticks to protect them from tripping. Such comical services in particular tend to go to the extreme, such as when he decides to "boost the morale" of the army by putting up naked posters of Chrom in each and every tent in the camp.

In a support conversation Frederick shares with Lissa, it is revealed that he is so stern that he does not even understand the concept of "how to relax". In fact, when told to tone down his assistance in his supports with Chrom, he ends up doing even more, to the point of trying to dust Robin when they are trying to have a meeting with the latter. Adding on to this, Maribelle remarks that he resembles a steward in the way that he acts, a fact only reinforced by the formal suit he wears under his armor. His conversations with Jakob in the DLC Before Awakening also support this idea of his incapability to shirk from his duties. Here, he expresses immense pleasure at meeting someone he considers an equal in the art of serving one's liege.

In a support with Panne, it is revealed that Frederick suffers from a phobia of large animals. This is due to him being seriously injured by a mountain wolf when he was a child. He also exhibits disdain for meats with gamy textures - especially bear meat - in his support conversations with Robin and in the Before Awakening DLC.

According to his in-game profile, Frederick enjoys making fires the most out of anyone in the army.

Frederick is the Oifey of Awakening, meaning he is a pre-promoted unit recruited early in the game and joins with better bases than your other units and as a promoted Great Knight. As an Oifey, he has good growths as well, meaning that he can contribute throughout the entire game successfully. Frederick is a perfectly capable unit with good strength, skill, and defense growths, with decent speed growths as well, on top of a guaranteed HP boost every level. Frederick can also learn Luna (which would be a good skill to pass down on to his child, if married) before hitting Chapter 11 with proper level grinding, making his role as an offensive force much more prominent. Frederick needs to be wary of mages due to his lower resistance, especially as a Great Knight. True to his archetype, he may fall behind later in the game once other units begin to promote, but he is an effective unit on normal by the Endgame without reclassing once. However all is not lost for Frederick as the Reclassing system will break him out of his archetype's curse and eventually, like everyone else, bring him to his maximum potential.

On higher difficulties, Frederick's kit is not good in the long run without reclassing. Still, if playing on Lunatic or Lunatic+, Frederick is critical to survive the initial maps until level grinding can begin. With the majorly buffed and aggressive enemies in this mode, most playable units from the Prologue to Chapter 4 will be unable to take down any enemy on their own and the enemy will almost always one-shot any unit. Frederick is the lone exception in this case as his high starting stats and his Silver Lance makes him the best way to properly deal with the enemies until Chapter 4 has been completed. However he is not invincible so Pair Up him with units who will give him good stat Support Boosts such as Chrom, Robin, and Sully in the mean time.

His base class comes from the Cavalier line, so he will start off with Discipline which will make Frederick a mobile jack-of-all-trades physical unit with a Lance rank of B and a Sword and Axe rank of D. With Discipline in action, he should completely master his three weapons in no time. Outdoor Fighter will boost Frederick's effectiveness in the initial half of the game due to the large amount of outdoor maps. Frederick can slide reclass into a Paladin once he reaches level 10. He can grab Defender to boost his stats in a Pair Up and most importantly Aegis, to mostly halve incoming magic regardless of his class.

Frederick's two reclassing sets are the Wyvern Rider and Knight lines. Frederick performs moderately well as both sets due to their physical nature though both focus on separate stats. As a Knight and a General, Frederick will get a good boost in defenses though he will need to be wary of mages especially in these classes—thankfully, his access to Aegis patches this weakness well if Frederick decides to end in this class. He can also grab Pavise to boost his physical defenses making him even harder to take down physically, which also makes him one of only two first-generation units to attain universal protection with both Aegis and Pavise (along with Robin).

As a Wyvern Rider, Frederick can get Deliverer from the Griffon Rider class, expanding his utility in pair-ups alongside Dual Guard+ and Defender. Lancebreaker is also a highly useful skill for Frederick if he should decide to end as one of his horse-mounted classes, thus alleviating his weakness to Beast Killers. While the Griffon Rider class also serves to patch Frederick's less-than-stellar speed by adding 5% to the growth making it 55% instead of 50%, reclassing to a Wyvern Lord makes his tanking ability all the more potent, bolstering his strengths and only exaggerating his weaknesses slightly. Despite his slowness, Frederick's access to Aegis makes the class especially effective for him, as it greatly lessens the class's weakness to both magic and bows, with the Wyvern Lord's skill of Swordbreaker covering the third weakness of Wyrmslayers.

Horizon Watcher
A knight who serves the royal house of Ylisse. Collector of pebbles and shells on the beach. Appears in Fire Emblem Awakening.

“I've never encountered anything like these creatures before! Oddly, they seem more human than animal, though... No matter--I will not let you harm my Lord or my Lady. Exalt Emmeryn would never forgive me if something happened to them!”
—Frederick's pre-battle quote

Frederick - Cold Lieutenant
As Ylisse's new knight captain, Frederick took charge of keeping the peace and training new recruits. Few ever forgot his glowing smile and idle quips, even as he doled out tasks that would break a wyvern.

Frederick and Robin
Many wrote of Robin's legendary exploits, but accounts of her origins and character varied. Scholars, poets, and bards agreed on one thing alone—she loved her husband, Frederick, above all else.

Frederick and Cordelia
As Ylisse's new knight captain, Frederick took charge of keeping the peace and training new recruits with his wife. Teaching was hard for Cordelia, however, as she was forced to neglect her own gifts.

Frederick and Lissa
As Ylisse's new knight captain, Frederick took charge of keeping the peace and training new recruits. Lissa often visited his charges in town to report concerns, and transgressions, to her husband.

Frederick and Maribelle
As Ylisse's new knight captain, Frederick took charge of keeping the peace and training new recruits. His wife, Maribelle, did her own part for Ylisse by studying hard and becoming a respected magistrate.

Frederick and Miriel
As Ylisse's new knight captain, Frederick took charge of keeping the peace and training new recruits. Alas, his wife, Miriel, would often vanish for weeks at a time as she pursued her studies.

Frederick and Nowi
As Ylisse's new knight captain, Frederick took charge of keeping the peace and training new recruits. His wife, Nowi, frequently came to the training yard to lend a hand or instill terror in a new charge.

Frederick and Olivia
As Ylisse's new knight captain, Frederick took charge of keeping the peace and training new recruits. His wife Olivia's dances were said to keep his resolve strong and open the minds of his charges.

Frederick and Panne
As Ylisse's new knight captain, Frederick took charge of keeping the peace and training new recruits. His wife, Panne, showed no interest in his work but gradually learned to enjoy human life.

Frederick and Sully
As Ylisse's new knight captain, Frederick took charge of keeping the peace and training new recruits. His wife, Sully, assisted him, becoming an object of admiration for strong women the world round.

Frederick and Sumia
As Ylisse's new knight captain, Frederick took charge of keeping the peace and training new recruits. His wife, Sumia, traded her lance for a peaceful stretch of pasture and raised a happy group of pegasi.

Frederick is illustrated in the trading card game with the following cards: 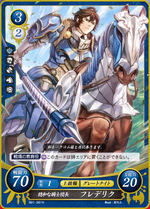 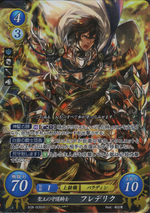 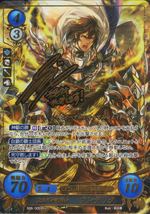 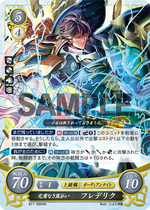 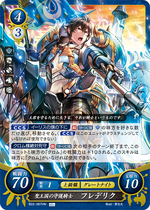 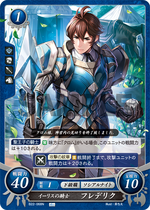 Frederick is an English form of a German name meaning "peaceful ruler", coming from frid (peace), and ric (ruler, power). [1]