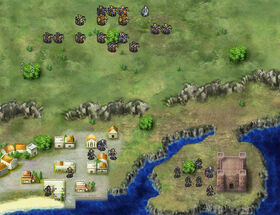 Chapter script
[view]
“This war has absolutely nothing to do with us ordinary citizens. Getting involved would only cause us trouble. And furthermore, if we allowed you into the city, we would have to fight for our self-defense.”
—The mayor of the city of Sene, in a conversation with Runan.

If you bring Plum in this map and have her visit the house where Billford and Sharon came out, she will be kidnapped and won't be playable until she's recruited again in Map 14 with the Dance skill. Since Plum is the only character with the Dance skill, this is the only way to obtain a unit who is guaranteed to refresh other units.

If your army does not approach the castle, but also prevents Mintz from entering it, Rennie will be killed on turn 10. It is unknown if Mintz is still recruitable after that.