Freeze (フリーズ Furīzu) is a status-inflicting Staff, and later White Magic, that is introduced in Fire Emblem Fates. When used in battle, Freeze seals a selected enemy target in place by reducing their Movement to 0 until the next turn. In Fates, the staff also reduces the opponent's Avoid by 20. 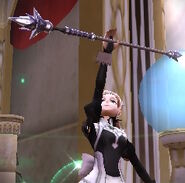