Cavalier
[view]
“Count this knight honored to die in the service of his prince. Live, sire, and grow strong…”
—Frey, if chosen to be the decoy in Fire Emblem: Shadow Dragon

Frey is a playable Cavalier who is one of the exclusive characters in Fire Emblem: Shadow Dragon and Fire Emblem: New Mystery of the Emblem. A knight of Altea under Jagen's command, he accompanies Marth during the prologue and while the player can choose whether or not to sacrifice him as the decoy at the final stage of the prologue, it is stated in a support conversation in New Mystery of the Emblem that he was the canonical sacrifice.

In Shadow Dragon he joins in Prologue II, in the second remake he rejoins Marth’s army alongside Norne during Chapter 6.

When Altea was invaded by their former ally Gra at the onset of the War of Shadows, Frey had been one of the remaining knights that guarded the Altean Castle when King Cornelius left to battle Medeus. Subsequently, Frey was bidden by Princess Elice to protect Marth, along with Abel, when it was discovered that Cornelius had been killed in action due to the treachery of the Gra forces, who had struck the Altean army from the rear. After joining up with Jagen and Cain at the gates of the castle, they aided in the prince’s escape and fled to the country’s borders to seek refuge in the kingdom of Talys. En route to the harbor that would let them escape, they needed to first cut through a prison to the north where an Altean archer was being kept captive. Upon learning that Marth and a group of his knights were approaching, the captain of the prison devised a plan to kill the prince before the main force of Gra arrived. He ordered for a gagged prisoner to be brought forth, disguised as a Gra soldier, which he thought would be enough to deceive the prince into killing him. Afterward, they would open the north door of the prison and lure them out for striking down.

Nonetheless, his plan can be foiled if Marth recognized Gordin’s face and spared him from an untimely death. Soon after that, the main force of Gra, accompanied by the Sable Order of Knights, arrived in pursuit of the prince. Realizing that they would not be able to escape in time or defeat these powerful foes, Malledus suggested to Marth that one of his men leave for the southern fortress and dress himself to look like the prince to lure them away, giving the others enough time to escape. Although Marth was opposed to this gambit after learning that the decoy may not make it back alive, one of his men left regardless and sacrificed himself for Marth’s sake.

Depending on the player’s actions, Frey could either be chosen as the decoy or be allowed to accompany Marth to Talys. If he was not chosen as the decoy, Frey assisted Marth in the ensuing war against the Dolhr empire and its allies and once the war had been brought to an end with Medeus’s demise, Frey stayed in Altea and contributed to its reconstruction according to his ending.

When he returns in Fire Emblem: New Mystery of the Emblem, it is revealed in his support conversations with Kris that the enemy had wounded him severely and left him for dead when they discovered the ruse of the decoy, but he miraculously survived his injuries. After laying on the brink of death for many days, he eventually recovered, although he was left with a particular scar that caused him recurrent pain. Also, as a result of the trauma, Frey had lost his memories and for a long time he lived as another person. When he finally regained his memories though, he was able to return to Marth’s side and continue to serve him becoming an instructor for new recruits in the Altean army, along with Cain, and provided lectures for members of the seventh platoon.

Subsequently, when Altea was invaded by Archanea under the orders of Hardin, Frey was among the few soldiers who had managed to escape from the castle and reach Marth at Olbern Castle in Grust. Frey then joined in the war efforts against Archanea and later, the Shadow Dragon, whom was ultimately defeated once more before he could be fully resurrected by Gharnef. Afterward, Frey returned to Altea and continued dutifully teaching the future generation of Altean knights as an instructor.

As with many of the other knights of Altea, Frey is characterized by his dedicated loyalty to his homeland and his prince. His willingness to sacrifice himself in order to let Marth escape to Talys can be seen as an indication of the depths of his fealty, since in doing so, he placed his own life in great jeopardy by luring the enemies away, by himself. Frey seems to have a brave, compassionate and self-denying personality, as he considers the well-being of others before his own. In his support conversations with Kris, he admits that he took it upon himself to become the decoy for the sake of everyone else because he felt compassionate toward them and responsible for bearing the burden alone. His selfless nature caused him to later become an instructor for the Altean army as well, when it was apparent that no one else could do it.

Despite being only available in Normal Mode, Frey is a solid unit with balanced stats all across the board. All of his stats as a physical unit are average or higher, and he will generally cap his skill and speed. Thus, Paladin is not the only place he has, as he can function as a Swordmaster, Sniper, or Dracoknight. Frey can also function as a Mage, with slightly higher magic and resistance growth rates than normal; he will also still have a small chance to boost his strength and cut down on Attack Speed penalties. However, he will have no chance to boost his defense, and thus should be accommodated for if using him as one. Overall, Frey is a solid unit with several decent class options to choose from, but he is not available in any of the hard modes, so he can only be used in Normal mode, where characters with lower stats can still function.

In New Mystery of the Emblem, Frey’s improved growth rates and base stats are adequate enough to keep him usable for the rest of the game after he joins. He can be a viable replacement for any of the earlier cavaliers, including Luke or Roderick if they are not up to par, or he can supplement them during battle. His supports with the two Whitewings are considerably more desirable in New Mystery of the Emblem than in Shadow Dragon since both characters have better stats and utility, although their support bonuses can only reach to a maximum of B.

"Frey stayed in Altea to help rebuild his ravaged kingdom."

"As a knight of Altea, Frey dedicated himself to teaching future knights."

Frey is illustrated in the trading card game Fire Emblem Cipher with the following cards: 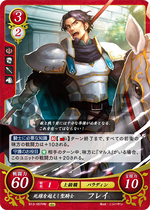 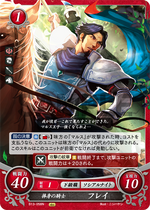 Frey is a variant of Scandinavian name that means “lord” or “master.” In Norse mythology, Frey is the name of the god of peace, fertility, and prosperity, who was commonly associated with weather and dispensed both rain and sunshine.

Artwork of Frey in Fire Emblem 0 (Cipher) by Nijihayashi.

Artwork of Frey in Fire Emblem 0 (Cipher) by Nijihayashi.

Frey as a Paladin in Fire Emblem 0 (Cipher).

Frey as a Cavalier in Fire Emblem 0 (Cipher).