Freyr is a character from Book IV of Fire Emblem Heroes. He is a Ljósálfar, and king of Ljósálfheimr, the realm of dreams. He is the god who governs dreams. He wishes for all to live in tranquility.

At the end of Chapter 4, Freyr is kidnapped by his sister Freyja, with the help of Plumeria and Triandra, and since he gave away Gullinkambi, his only defense against Freyja and the Dökkálfar, to the Order of Heroes.

In Chapter 9, Freyja forces the necklace Brísingamen onto Freyr, allowing her to have access to both the power of Dreams and Nightmare, and as a result become omnipotent.

In Chapter 10, Freyr blames himself for letting her sister Freyja steal all of the power of dreams so that the Order of Heroes will never escape Dökkálfheimr. When Freyja finally found them and was about to kill the Order of Heroes, Freyr was left with no choice: In order to weaken his sister by barring her the access the power of Dreams, they must kill him, which they reluctantly complied to do so. He then tells his sister that he was glad to see her face, even though his words were not good enough to reach her. And then, he succumbs to his wounds, angering Freyja for losing her own brother.

Freyr is a compassionate, and caring man who cares for his sister, Freyja. He tries to convince Freyja to change her views about humans, but fails.

Freyr cares deeply for humans, as seen in a certain situation in Chapter 10, and when he felt guilty for turning humans into ljósálfr and dökkálfr.

Dream-King
Dream-King of Ljósálfheimr, the dream realm. He is the god of dreams and wishes for all to lead tranquil, blissful lives.

Estival Dreams
Dream-King of Ljósálfheimr, the dream realm, making an appearance at the beach after being invited amidst a summer's dream.

Freyr is illustrated in the trading card game Fire Emblem Cipher with the following cards: 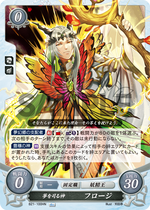 In Norse Mythology, Freyr is the god of peace, fertility, wealth, rain, summer and sunshine. He's the ruler of Alfheim, or Ljósálfheimr, and the twin brother of Freyja. During Ragnarok, Freyr will battle Surtr and will fall by the flame giant's hand.