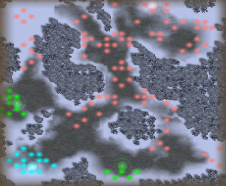 Micaiah (will abandon the battlefield after the death counter reaches 30)

Chapter script
[view]
“Queen Elincia and the dragons of Goldoa persuade both armies to accept a temporary truce. The blue light that burns within the medallion grows more fierce with each passing day. To prevent the awakening of the evil trapped within, the fighting must be stopped. However, the apostle and her army refuse to abandon Sephiran's forces in Begnion. Though they hoped that Daein would cease fighting, they knew battle was inevitable. The bloodshed begins anew.”
—Opening Narration

From Pain, Awakening is Chapter 3-E Fire Emblem: Radiant Dawn. The chapter takes place in a big, snow-covered map where the Daein army and the Laguz tribes clash. The objective of the map is to rout the enemy; however, a blue 0 will appear at the upper right corner of the screen. This number will go up for every dead unit (it also counts the retreating Daein units) and there will be small cinemas or events at numbers 10, 15, 20, 25 and 30 until it reaches number 80, when depending if Boyd and Mist have a Level A Support, he or Titania will call Ike and tell him to take Mist back to the fortress. If Boyd has the Level A Support, he will tell Ike that he will clear a path. As there are 84 Daein soldiers even before reinforcements, and allied units will inevitably die, the death counter makes the chapter's stated objective impossible. The Daein Army starts at the north and central parts of the map, laguz from Phoenicis start at the south, laguz from Gallia start at the west, with the Greil Mercenaries at the southwest.

Queen Nailah and Prince Rafiel decide to join Micaiah and her forces along with Prince Kurthnaga from Goldoa, wanting to fight for the people they love. Meanwhile, Lehran's Medallion is starting to reach a point in which the galdr is no longer able to hold it back and the "Dark God" would be released. The leaders of the Apostle's Army decide to end this fight quickly to head Begnion and avoid the awakening of the "Dark God".

At the end of the chapter, Mist tells Ike that the "Dark God" will wake up, and to wake it without war. Then Mist and the herons pass out. Sanaki sings the galdr of release on Ike's request to wake the "Dark God" not by war, and when Sanaki is unsuccessful at awakening the "Dark God" peacefully, Micaiah sings the galdr with its complete lyrics and Yune momentarily takes over Micaiah's body to say that Ashera mustn't break her promise, but when Ashera wakes up she casts her Judgment upon the world, turning everybody but the playable characters and Merchant Convoy into stone. Yune then takes over Micaiah's body again so she can talk with the survivors. She proposes that they to go to the Tower of Guidance to get everybody back to normal, dividing all of the survivor characters into three armies: The Silver Army, The Greil Army and The Hawk Army. Each one has forced characters to them, as per the storyline, but you can move almost all of the other units.