Chapter script
[view]
“This was truly a journey beyond all imagination. Five thousand meters… No, perhaps even higher than that. The clouds already below them, they ascend the frozen mountain. Suffocation… Vertigo… They were already approaching the limits of their strengths.”
—Opening Narration, Shin Monsho no Nazo

The reinforcements will only spawn for the first two turns after you set foot on the middle island.

The Secret Shop is located at the non-snow tile at the southwest (original) or in between two rocks at the west (remake). 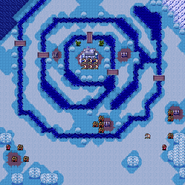 Chapter 13 map from Fire Emblem: Mystery of the Emblem. 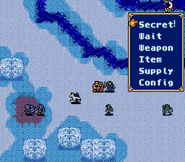