Fuga (フウガ Fūga) is a playable character in Fire Emblem Fates. He is voiced by Hiroshi Matsumoto in the Japanese version. He is only recruitable in the Revelation route.

The chieftain of Hoshido’s Wind Tribe, he's the late King Sumeragi’s best friend. He possesses a majesty unique to a veteran hero and his entire body exudes the presence of a stalwart warrior. He uses his opponent’s strength to determine their character and ability. In addition, he is Hayato's adoptive father. He is the most loved by children.

In Chapter 20, Fuga meets with the Avatar and the Nohrian forces. Playing a neutral role in the war with Hoshido and Nohr, he blocks a passage leading deeper into the caves. Before he lets them through, he challenges them to a fight to see if they are worthy enough to use the passage. Fuga and his Wind Tribe members fight the Nohrian forces on a windy passageway to put them at a disadvantage, and after he is defeated he deems them worthy enough. He later leaves with Hayato, wishing them luck.

Fūga (風雅) can be translated as elegance, grace, refinement and good taste. It also contains the kanji for "wind" and "fang", with its most likely translation being "wind fang". 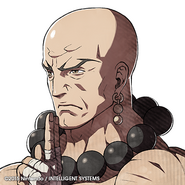 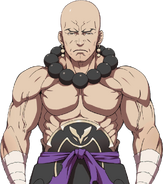 Fuga's model for My Room.
Add a photo to this gallery