Adventurer
[view]
“What? You refuse your mission? That reeks of treachery. Reconsider, child.”
—Funke in Paralogue 9

Funke (ファンク Fanku, lit. Funk) is a capturable boss character from Fire Emblem Fates on the Birthright and Revelation routes. A burglar who breaks into the houses of the wealthy, Funke launches an attack on Corrin's army in Paralogue 9.

Funke appears in Paralogue 9, where he admonishes Asugi for refusing to assist him on a mission to raid a wealthy manor, treating his defiance as an act of treachery. Midway through their conversation, Funke and Asugi stumble upon Saizo and Subaki, both of whom had entered Asugi's Deeprealm with Corrin's army to check on Asugi's training progress. Saizo, upon overhearing the exchange, promptly begins interrogating his son on his association with thievery and his adoption of a different name. Funke, upon realising Saizo's identity as Asugi's father, attempts to convince Asugi to get Saizo and Corrin's army to assist him on his raiding mission. This causes the argument between the father and son to escalate, to the point where Asugi leaves in affront. Funke is in turn prompted to adopt a hostile stance against Saizo and Corrin's army for driving away his "best associate". A battle thereafter ensues, one that sees Funke failing to administer his intended punishment as he is defeated, either slain or captured by Corrin's army. Funke also appears as a potential visitor in the DLC episode Museum Melee.

Funke will be added into the Unit Logbook as soon as he is persuaded to join the player's army in Birthright/Revelation. In order to use him in Conquest, the only path he's not available in, the said path of Fire Emblem Fates must be purchased through the same cartridge or same saved data on the Nintendo 3DS.

Although Funke's personality is not well developed due to his minor involvement with the plot, some points on his character may still be gleaned. For one, he is portrayed to be an individual with an insatiable greed for monetary wealth, one that sees him organising an elaborate band of ruffians to burgle the homes of the wealthy. Funke has also been portrayed as an opportunistic person, eagerly seizing upon any situation that may be potentially beneficial to him. This fact can be observed during the exchange between Saizo and Asugi, where Funke, upon realising Saizo's identity, attempts to enlist his aid in successfully completing his raiding mission.

“Ah, one of our guests! Well then, let me extend my invitation to you... An invitation—to die!”
—Funke's pre-battle quote.
“No... I can't! Not like this! I wanted so such more...”
—Funke's death quote 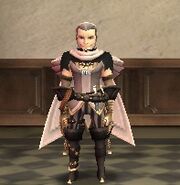