Gáe Bolg (ゲイボルグ Gei borugu, alternately translated Gayborg in Fire Emblem Treasure) is a holy Lance from Fire Emblem: Genealogy of the Holy War. This lance was once wielded by Njörun the Crusader, bestowed upon her by an unidentified Divine Dragon during the Miracle of Darna. Gáe Bolg is the property of Njörun's descendants, who are the heirs of the Manster District.

In Genealogy of the Holy War, Gáe Bolg grants its wielder bonuses of +10 Strength, +10 Skill and +10 Defense. This lance may only be wielded by users possessing major Njörun holy blood, the only characters with this requirement being Quan and his daughter Altena.

In Fire Emblem: Thracia 776, it is stated that a flag of Gáe Bolg was once hung from Leonster Castle while the descendants of Njörun were still in power.

Gáe Bolg is said to be have a curse that visits tragedy upon its owner. The story of this curse began with the brother and sister Crusaders Njörun and Dain, who shared a close sibling relationship. This intimacy caused them to jointly rule the Thracian Peninsula as one country, comprising both the Manster District and Kingdom of Thracia.

At some point, Njörun wed a knight who was a good friend of her brother's, and the two lived happily for a good while. However, Njörun's husband and Dain later got into an argument, one that led to them dueling each other. In an attempt to break up the fight, Njörun accidentally impaled her husband with Gáe Bolg. This was quickly followed by Njörun committing suicide out of both grief and guilt, alongside Dain dying under mysterious circumstances. A series of unfortunate events occurring within the Leonster royal family then occurred, which eventually caused Thracia to split into two distinct northern and southern districts.

After these events, it became known that Gungnir and Gáe Bolg were intertwined, and that Gáe Bolg is the lance that controls both love and sorrow, promising to tear asunder any couple whose hands it falls into. For this reason, Ethlyn is initially hesitant to give Quan the lance in Chapter 3 of Genealogy of the Holy War, as she believes that it will end up in their happiness being ruined by Quan's death. Both the Aed Massacre, where Quan (who possessed Gáe Bolg) and Ethlyn are killed by Travant (who possessed Gungnir), and the conflict that separates the adopted siblings Arion and Altena in Chapter 9 are said to be due to the Curse of Gáe Bolg.

Gáe Bolg is the spear wielded by the Irish folk hero, Cu Chulainn. In Irish Gaelic, Gáe Bolg can translate to "spear of mortal pain/death", or "belly spear".

Gáe Bolg, as it appears in the third series of the TCG.

Gáe Bolg as it appears in Fire Emblem Heroes. 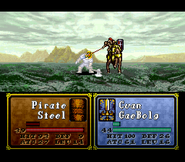 Quan wielding Gáe Bolg in Genealogy of the Holy War. 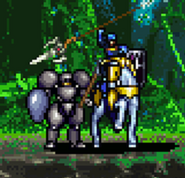 Finn wielding a hacked version of Gáe Bolg in Thracia 776.