Hired Thief
Member of the Shepherds

[view]
“Fine then, I'll prove my sincerity...if you sweeten the deal.”
—Gaius' recruitment quote to Chrom in Chapter 6.

Gaius is a playable character in Fire Emblem Awakening.

Gaius is a thief living in Ylisse and will do any job if paid the right price. He loves sweets and has candy hidden all over his body.

Prior to events of Awakening, Gaius snuck into the royal treasury and was promptly caught, arrested and testified against the duke of Themis, causing the magistrate to sentence the duke to death. Gaius, reluctant about framing the duke, sent a letter to the magistrate after the trial, which saved the duke from the headsman's axe. His supports with Maribelle reveal that he was forced by other nobles to frame her father, or else they would kill her and also keep him imprisoned. Though well aware of the fact that the conspiring nobles would try to kill him as a result of saving the duke, Gaius easily escaped their wrath.

Gaius also has a tattoo branded on his arm, which he states that he was doing a favor for a mate when he was caught. This causes him considerable embarrassment when mentioned. It is unknown if he had the tattoo prior to breaking into the Duke of Themis' treasury or after it.

Gaius was hired by Validar under the pretense of stealing from the treasury, but actually to help assassinate Emmeryn. Upon discovering the true plan of the raid, Gaius talks to Chrom and asks to be hired by him instead. Though Chrom is unsure, he accidentally drops a satchel he received earlier from Lissa. When Gaius asks about the contents of the satchel, he is elated to learn that they are filled with sweets. He willingly decides to join Chrom's army, as long as he can have that bag of candy and ask Lissa if she has any more.

After the war, Gaius's sweet tooth never faded, and he returned to his old ways of thievery. Tales of "Sticky-Fingers Gaius" become popular in taverns.

Gaius is calm and collected, with a clear mind. However, his seriousness breaks whenever candy and other sweet confections are brought into the question. Despite the nature of his job, Gaius has morals and does things with the best interest of others, such as his unwillingness to assassinate Emmeryn because he likes her, or blaming Maribelle's father for his theft incident to protect Maribelle.

Due to his occupation as a thief, he does not believe in "something-for-nothing" as shown with his supports with both male and female Robin where he refuses to forget about them knowing his criminal tattoo on his arm until they reveal one of their own to him. He is also afraid of bugs as shown with his conversations with Lon'qu in the Summer Scramble DLC. Gaius has hypoglycemia, which is why he must carry sweets on him at all times.

As revealed in his supports, he is good at making things by hand, like jewelry and embroidery, and also is good with housework. His support conversations with Olivia also reveals that he enjoys baking his own sweets. Gaius is also very open to criticism, using any feedback people tell him to try and improve his skills further. He also addresses Robin by the nickname, "Bubbles."

Gaius is also a practiced liar, a trait fitting of his profession. In his support with Nowi, he details that he prefers older women ("A poised woman that has class and bearing, but knows exactly what she wants"), but though his description seems very convincing, he later reveals it had been a lie.

In the translated versions of the game Gaius often refers to people by nicknames instead of using their given names during Support Conversations. They are based on either their appearance, personality or occupation and - as done in Tharja's case - can be used sarcastically. Across both the Support Log and the DLC side conversations, he addresses Robin as "Bubbles" (regardless of gender), Chrom as "Blue", Lissa as "Princess", Miriel as "Specs", Sumia as "Stumbles", Maribelle as "Twinkles", Panne as "Whiskers", Nowi as "Kid", Libra as "Padre", Tharja as "Sunshine", Olivia as "Babe" (even in non-romantic Support Conversations), Anna as "Red", Virion as "Your Lordship," Cordelia as "Mother," and Henry as "Junior". The only characters he can have a conversation with that he gives no nicknames to are Cherche, Sully (though she herself nicknames him "Chuckles"), and his own child (with the exception of if he marries Tharja, in which case he calls Noire "cupcake.").

Description: A formidable Ylissean thief with a soft spot for sugar.

Gaius has a Male-only class: Fighter. If he marries someone who produces a daughter, then his daughter will inherit the following class instead.

As per any thief, Gaius' Skill and Speed are very high with low defenses to offset them. The unusual aspect of Gaius lies in his high HP and Strength. Pairing him up with another unit to aid his low defenses is a good idea to keep him alive while in the process of building his levels.

As a Trickster, Gaius will not be able to make too much use of the ability to use staves due to his low Magic. The Lucky Seven skill that he learns in this class is, however, incredibly useful for 7 turns, allowing him to take on the initial wave of enemies in any given battle. Further complementing this is the Acrobat skill, which may prove instrumental in helping him to escape from danger on ground movement-hindering terrain.

As an Assassin, Gaius gains the ability to wield Bows as his secondary weapon, allowing him to steer away from melee combat. Lethality may not activate very often due to it having a low chance of activating, but it can potentially strike down an enemy who possesses strong Defense and prevent wastage of the equipped weapon's Durability. Pass is a relatively useful skill that Gaius can learn in this class, allowing him to sneak past enemies when the need arises.

Gaius' alternate class sets are that of the Myrmidon and the Fighter. Gaius fares well as a Myrmidon due to his high Skill and Speed, outshining Lon'qu in Strength and HP, alongside having Skill and Speed caps that are inferior to Lon'qu's by merely one point. The Avoid +10 skill increases Gaius' longevity by aiding him in dodging enemy attacks, and the Vantage skill may potentially allow him to defeat enemies before they strike while he is weakened. Changing Gaius' class into that of the Swordmaster will further maximize his potential, owing to the Astra and Swordfaire skills that he stands to learn.

Taking on the Fighter route is not recommended, as Gaius still possesses a low Defense growth despite being in a frontline class. The Max HP +5 skill will help him to remain alive for a longer period of time, while Zeal boosts his critical attack rate by a small amount. Promoting Gaius into a Warrior will grant him the ability to wield bows like the Assassin, allowing him to snipe foes from the rear. Upon learning the Counter skill, Gaius' low Defense will come in handy, as the vast amount of damage that he could sustain will be deflected back to his opponent and potentially kill them. As a Hero, Gaius can acquire the Sol skill to help mitigate his low Defense.

Candy Stealer
Thief of Ylisse known for his nimble hands and sweet tooth. Hides sweets in his pockets. Appears in Fire Emblem Awakening.

Thief Exposed
A thief from Ylisse known for his sweet tooth. Usually secrets candy in he clothes, but can't when dressed like this. Appears in Fire Emblem Awakening.

Gaius and Robin
Many wrote of Robin's legendary exploits, but accounts of her origins and character varied. Scholars, poets, and bards agreed on one thing alone—she loved her husband, Gaius, above all else.

Gaius and Lissa
Gaius never lost his sweet tooth, though he ultimately returned to less savory enterprises. Lissa always insisted on going along, and the two survived many a comically dire predicament together.

Gaius and Sully
Gaius never lost his sweet tooth, though he ultimately returned to less savory enterprises. Sully disapproved and was said to pester her husband to take the examination for Ylissean knighthood instead.

Gaius and Miriel
Gaius never lost his sweet tooth, though he ultimately returned to less savory enterprises. Miriel soon began researching new and more-powerful sweeteners for her husband to enjoy.

Gaius and Sumia
Gaius never lost his sweet tooth, though he ultimately returned to less savory enterprises. His wife, Sumia, raised pegasi, and her flower-petal readings were said to bring good luck to all.

Gaius and Maribelle
Gaius never lost his sweet tooth, though he ultimately returned to less savory enterprises. Having studied to become a magistrate, Maribelle feared the day she would meet her own husband in court.

Gaius and Panne
Gaius never lost his sweet tooth, though he ultimately returned to less savory enterprises. Amazingly, Panne dirtied her hands right along with her husband, using her keen night vision to expedite jobs.

Gaius and Cordelia
Gaius never lost his sweet tooth, though he ultimately returned to less savory enterprises. As his wife, Cordelia was in charge of keeping law and order, Gaius dreaded the thought of seeing her on the job.

Gaius and Nowi
Gaius never lost his sweet tooth, though he ultimately returned to less savory enterprises. Nowi found her husband's work intriguing and was said to often come along and help out.

Gaius and Tharja
Gaius never lost his sweet tooth, though he ultimately returned to less savory enterprises. Meanwhile, his wife, Tharja, set up shop and hexed people for a living. The pair were said to get many odd looks.

Gaius and Olivia
Gaius never lost his sweet tooth, though he ultimately returned to less savory enterprises. His wife, Olivia, wandered down more than one dark alley just to make sure he was safe and sound.

Gaius and Cherche
Gaius never lost his sweet tooth, though he ultimately returned to less savory enterprises. When her work in Rosanne was done, Cherche would return home and cook for her husband, much to his delight.

Gaius is illustrated in the trading card game Fire Emblem Cipher with the following cards: 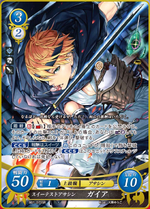 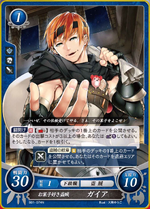 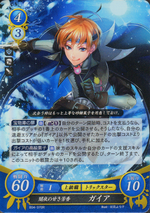 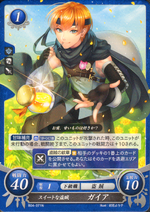 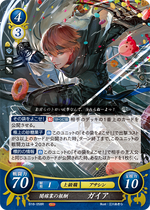 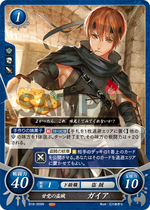 Guire is an Irish name meaning "beige color". It is also a shortened form of the name "MacGuire".

In Greek and Roman mythologies, Gaia (also known as Tellus) was an earth goddess and the wife of Ouranos. Her children were Kronos, Rhea, Hyperion, Oceanus, Themis, Crius, Mnemosyne, Iapetus, Tethys, Coeus, Thea, and Phoebe. Gaia was also Palla's grandmother.

Gaius is a Latin name meaning "rejoicer". Gaius could also be named after Gaius Julius Caesar (more commonly known as Julius Caesar), who was a Roman general and statesman.

Similarly, the character Gayev from Anton Tchekhov's stageplay The Cherry Orchard (1904) is described as having an addiction for billiards and sweets.